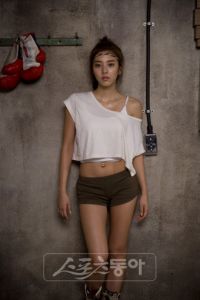 Son is the Taebo master, Lee So-yeon in the drama for which Son practiced Taebo for 6 hours everyday for three months. She is a pop star whom we all know was a workaholic practicing her moves for 16 hours a day. It was the same hard work that brought such praise in her acting skills in her starting scenes of the drama.

Son had said that it was very hard in the beginning. She thought that it might be easier than dance practices but she was wrong. However, she had always worked out that her body was able to handle the pressure. Let's watch her great acting!

"[ChanMi's star news] Son Dam-bi is 42kg!"
by HanCinema is licensed under a Creative Commons Attribution-Share Alike 3.0 Unported License.
Based on a work from this source