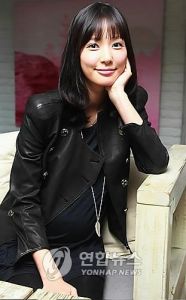 Son Tae-young had her first interview after her pregnancy!

She is 171cm tall and doesn't look much different besides her grown belly once you look at her closely. Her face is not swollen nor are her hands and feet. She looks as if she is in the first trimester, however she is due in only a few months!

She has gained 7 kg since her pregnancy and suffered a lot of morning sickness in the beginning.

Son said that she wanted to avoid all the bad gossip and malicious comments on the internet about her marriage to kwon Sang-woo and the pregnancy before marriage. Son even considered having the baby in Australia, however, when Kwon returned to Korea Son became depressed without him. So, Son returned to Korea to be with her husband.

Son wishes to be confident in her situation and be unashamed of bad gossips. 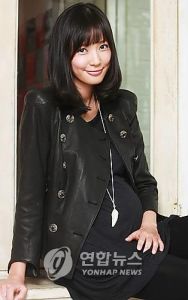 "[ChanMi's star news] Son Tae-young reveals her growing belly!"
by HanCinema is licensed under a Creative Commons Attribution-Share Alike 3.0 Unported License.
Based on a work from this source