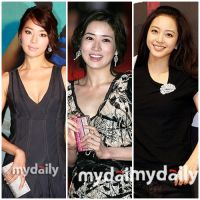 Actress Han Ji-hye, Choi Jung-won, and Han Ye-seul are being considered for the emcee position at the year end Acting Awards!

Han Ji-hye and the comedian Shin Dong-yeop are emcees for the 2008 MBC Acting Awards later this year.

Actress Choi Jung-won is emcee for the 2008 KBS Acting Awards.

And Han Ye-seul is the emcee for 2008 SBS Acting Awards with actor Ryu Si-won!

These three actresses are well known for their beauties as well as their unique character! They will meet their fans in images different from those in the dramas. Let's see who will be better emcees at the year end award ceremonies!

"[ChanMi's star news] Stars battling to emcee at year end Acting Awards?"
by HanCinema is licensed under a Creative Commons Attribution-Share Alike 3.0 Unported License.
Based on a work from this source