[ChanMi's star news] Who's the next Moon Geun-young figure? 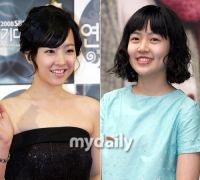 Moon Geun-young has been called the 'nation's younger sister' for a while due to her popularity through great acting and cute looks.

Now that Moon has grown into a mature young lady, who will take over the 'nation's younger sister' role?

Park Bo-young has been in the spotlight for a while through the film, "Speedy Scandal" costarring with Cha Tae-hyun.

A new rising star is Shim Eun-kyung who is taking the child actress role in the drama "My Dad Loves Trouble". She is perfecting the dialect and acting!

"[ChanMi's star news] Who's the next Moon Geun-young figure?"
by HanCinema is licensed under a Creative Commons Attribution-Share Alike 3.0 Unported License.
Based on a work from this source