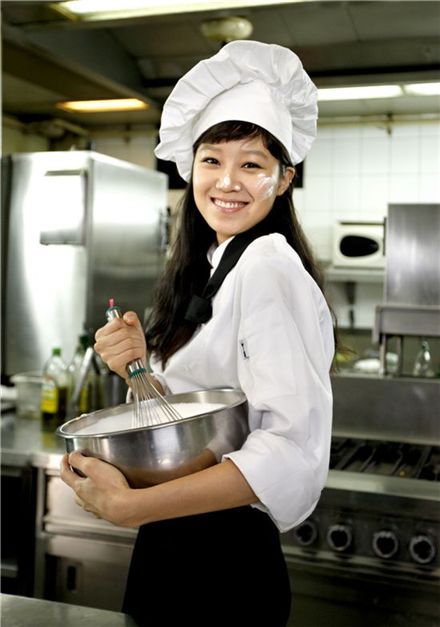 The youngest cook at Italian restaurant La Sfera. Despite having served as a kitchen assistant where the only dish of hers that went out for three years was pickles, was fired twice, almost froze to death and was abused and persecuted on countless occasions, she hung onto her job as if she would "die if told to die and be the floor if told to be the floor" -- and became the girlfriend of the chef, who appeared to have just returned from hell.

She came off as a fool who has never dated guys before but played the chef with unpredictable romantic strategies, like a newbie at the poker table who wins from beginner's luck. She started off with one-dimensional compliments such as "How could I ever beat you, chef?", provoked him with two-dimensional comments like "Do I look foolish to you because I like you, chef? Do I seem easy because you think I like you much more than you like me?" and topped it all off by making strongs statements such as "I will just think of reasons why I like you. You think of all the counter reasons". Of course, in such situations, one needs to rid oneself of all pride and be able to immediately cry out "Chef!" when asked the question "Do you like pasta or do you like me?" One needs be gutsy enough to utter a line such as, "I am happiest when I am with my chef" without rolling one's eyes. Thanks to all this, she made the chef confess to her, "I like you more and more", so I recommend that all single women in the country put in great efforts like Seo Yu-kyung rather than using the outdated method of trying to seduce a rich man by slapping his cheek.

"Character Seo Yu-kyung on TV series "Pasta""
by HanCinema is licensed under a Creative Commons Attribution-Share Alike 3.0 Unported License.
Based on a work from this source