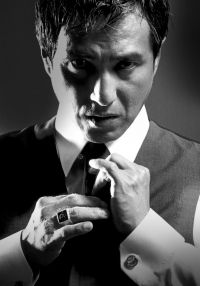 Veteran actor Cho Jae-hyun is returning to the stage three years after he starred in "Equus".

He will play a major role in "Kyungsugi, Kyungsugi's Father", directed by veteran playwright and director Park Keun-hyung.

The play premiered in July and took major theater awards last year. The performances in which Jo will star will be held at Dongsoong Art Center in Taehangno, Seoul, starting Thursday. The play will run through March 25.

"I have wanted to act in this play, as it is a good play that received favorable reviews from both critics and spectators", he said.

The play won a Daesan literary award, an arts award from the Arts Council Korea and a Donga theater award last year.

Cho said that he wanted to return to the stage whenever he saw a good play.

"Particularly, I wanted to collaborate with Park, after seeing his major works such as `Ode to Youth', and `Sunday Seoul', and this play", he said.

Jo, 41, excels in playing versatile and complex characters _ conspicuously charismatic characters or funny guys in TV drama series and films. One of his most notable roles was that of a down-to-earth father in the SBS drama "Piano" in 2001. He co-starred with actress Kim Ha-neul, who played his daughter. His performance caused many viewers to burst into tears, and cemented his acting prowess.

In the upcoming performances, he will play Kyungsuk's father, who is loyal to his desires and irresponsible in matters regarding his family. The father is tough and selfish, a contradictory figure in the Korean conception of the family.

In the play, the father leaves home, abandoning his wife and daughter in the middle of the Korean War (1950-53). He returns after the war with a new wife.

Park attempts to deliver a story about fatherhood in a heartbreaking tragedy that details the vicissitudes of Korean modern history.

Park's plays usually center on the lives of ordinary men, portrayed with a realistic approach. He bravely fills the stage with pathos and melancholy, at the same time evoking a sense that hope exists somewhere.

"Charismatic Actor to Star in Award-Winning Play"
by HanCinema is licensed under a Creative Commons Attribution-Share Alike 3.0 Unported License.
Based on a work from this source