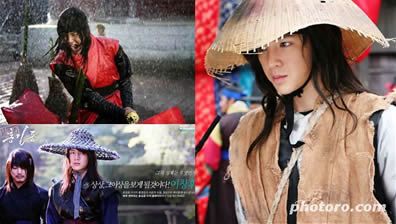 Jang Keun-suk plays character Chang Hee in KBS drama titled "Hong Gil Dong". There are several images that capture his performance on the newly opened teaser web site. Jang Keun-suk's performance leads you to believe he is a revengeful leader who becomes King. Pictures of Jang in the web site show a powerful character drastically different from roles he has played in previous drams. The staff from Olive Nine Inc. that produced 'Hong Gil Dong', stated that, "Jang is an actor of many faces and appearances who can accommodate any role he plays. He will overcome his pretty boy image and reveal a character of strength in this drama.

'Hong Gil Dong Fantasy Adventure' is the first historical drama categorized as a comedy in Korea. Kang Ji-hwan plays the main character in "Hong Gil Dong" and Sung Yu-ri takes the role of "Heo Inok". If you want to see these spectacular performances clear your calendar on Wednesday evening January 2, 2007 at 9:55 PM.

"Charismatic images of Jang Keun-suk staring in "Hong Gil Dong" appear on the newly opened teaser website"
by HanCinema is licensed under a Creative Commons Attribution-Share Alike 3.0 Unported License.
Based on a work from this source