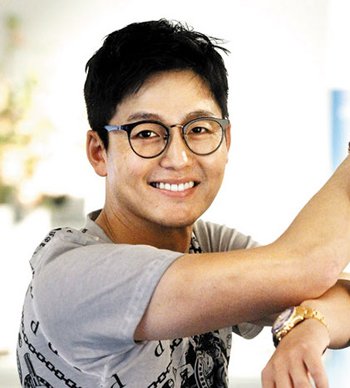 Actor Lee Jung-jin, who is celebrating the 20th anniversary of his debut, has a second passion these days -- taking photographs.

The world of photography opened for Lee while he was doing volunteer work in Kenya four years ago. He showed some of the many pictures he took while in the African country to photographer friends, who recognized his talent and encouraged him to take it up in a serious way.

In 2015, he held his first exhibition showing a selection of some 80 photos he took in Kenya and Nepal while doing charity activities. He has also published a photo book of celebrities including girl group members such as Tzuyu of TWICE and Woo-ri of Rainbow.

"In Meguara, a small village in a rural part of Kenya with no electricity, I wondered what I could do to make children there happy. I've been involved in many charity projects, building wells and schools in developing countries. But I wanted to do something different. So I printed out pictures taken with a digital camera and gave them to the kids as presents. The children's faces lit up with joy when they saw them", Lee said.

He recently held another exhibition along with fellow celebrities showing pictures they took on trips to Rota Island in the Northern Mariana Islands.

"What is so attractive about photography is that you can bring out new things about your subject. I experience that when I look at a fellow actor that I've known for a long time through the camera lens. I'm always surprised to discover sides of them I've never seen before. You get to know the person better", he said.

His shots of Tzuyu garnered much attention last year. His aim was to show new aspects of Tzuyu that people hadn't seen before. "Girl group members tend to keep their faces covered in makeup. But she is still a teenager, and I wanted to show that she is just like any other young, fresh-faced teenager", Lee said.

Lee is known for his tireless charity work. "In the past, I used to do this secretly, helping with meals and showers at facilities for disabled children. After it was reported by chance, I decided to do it openly. I often join overseas charity projects and encourage others to do the same", he said. He has been taking part in a library-building project in Nepal since 2011 and has helped build 27 libraries so far.

"In photography and charity work, I think it's important not to go overboard. You just do what you can. If it's difficult for you to go abroad to help those in poorer countries, then simply delivering news from home to those working there can boost their spirits. It's not hard to find something you can do, even if it seems trivial at first", he said.