"Cheese In The Trap" cast all in one place 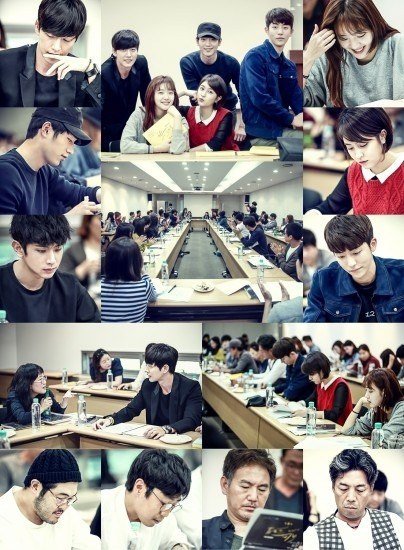 tvN drama "Cheese in the Trap" actors and actresses have come together in one place.

"Cheese in the Trap" is based on a web-toon and has officially started.

Despite the fact that it was just a 'test reading', the cast of the drama were readily prepared to read their lines. The main cast also came prepared looking like the characters they represent and increased hype for the drama.

When the script reading started, it was hard to believe it was the first time they were working together. Park Hae-jin and Kim Go-eun continuously made eye contact as they read their lines Kim Ki-bang and Heo Yoon-sup made bro-mance like they were doing the real thing.

After the script reading, produce Lee Yoon-jeong thanked everyone for their hard work and said he would see them on the real set.

Meanwhile, "Cheese in the Trap" is a romantic thriller of a man who hides his true colors and a girl who is the only one that can see it.

""Cheese In The Trap" cast all in one place"
by HanCinema is licensed under a Creative Commons Attribution-Share Alike 3.0 Unported License.
Based on a work from this source