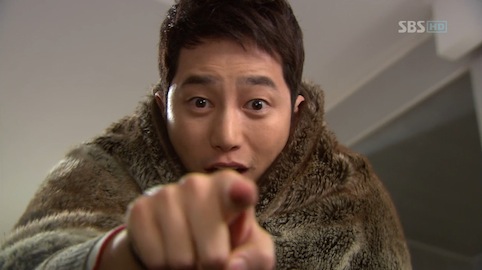 The women of Korea buy brand names. It's Seung-jo's theory that what distinguishes women is not just brand names, but the most expensive items on the market. In order to look more successful than everyone else, they will do anything to buy luxury items. But that's cool, since that's how Artemis rolls. So let the prices keep going up!

His impassioned speech shocks the audience AND his secretary.

Yeah, I think it's safe to assume that the man is crazy or has a serious misogynistic chip on his shoulder. Or both.

When the other higher ups question his idea, he says that it's fine because they don't just sell luxury stuff, but fear. That earns a gasp. But he doesn't stop. Women fear they'll be left behind as unfashionable bags of dirt, so they'll bend over backwards to get the newest, most fashionable gear. This means tomorrow's prices have to be higher than today's.

Seung-jo's crazy speech segues into Han Se-kyung's (MOON GEUN-YEONG) interview for a position at GN Fashion. She is the total opposite of Seung-jo: honest, open, basing her goals on bettering herself rather than her pocketbook. Although she hasn't gone abroad to study fashion, she's worked hard in Korea, won Korean contests, and earned the highest level of certification in the French language.

But that doesn't matter. No one likes that she didn't study abroad and she gets bad marks down the panel of judges.

The French judges asks, in French, what her credo is and to respond in French. Moon Geun-young makes a valiant effort, but I seriously can't understand anything except articles...

My effort is my strength, is her creed and she got it from her father who put thirty years of blood, sweat and tears into his bakery.

Shin Min-hyuk (Kim Seung-soo) and his wife Seo Yoon-joo (So Yi-hyun) sort through the interviews and Yoon-joo smiles wickedly and says that "she" hasn't changed at all, referring to Se-kyung. So a ponytail wearing guy goes to Shin In-hwa (Kim Yoo-ri) and shocks and angers her when she hears that the madame wants to hire Se-kyung despite her terrible scores.

But Se-kyung is stoked and called up her parents and boyfriend to brag about getting a job after three years. She tells the busy street that she'll open a shop in Cheongdam-dong and live there for sure, just it wait and see.

Moon Geun-young is so cute. But the predictability of this is already making me wary.

Ponytail tells Se-kyung she came in last place so she's running the madam's errands. Why was she hired then? It's a mystery.

Ooooh, I know. So you can be tortured by evil second lead!

She mentally bemoans the unfairness of the industry and runs across her new boss, Shin In-hwa coming out of her snazzy car in her snazzy outfit and introduces herself, but In-hwa is less than accommodating. Se-kyung wonders if her last place is because she didn't study abroad and In-hwa says she's half right.

Se-kyung goes to a wedding with her friends who congratulate her. Her best friend Choi Ah-jung (Shin So-yul) recites her merits while Se-kyung stews about last place.

The rings are exchanged and the friends ogle the expensive rings and the fact that the bride was last place amongst them and is now starting up a brand in Cheongdam-dong.

Outside, Ah-jung tries to convince Se-kyung to go back in and meet the groom's rich friends, which is why the rest of their social group came dressed to the nines. Se-kyung doesn't want to have any part of it, especially as she hasn't told them she's really just an errand girl, not a designer.

She wants to meet her boyfriend, So In-chan (Cameo by Namgoong Min) who is seriously in debt and calls him to complain how her friends only talk about designer brands and becoming Cheongdam-dong daughter-in-laws.

Of course, that's what this show is about. Show, you're so pedantic. You could've said all this is less than two seconds. Give me more crazy Park Si-hoo.

"Cheongdam-dong Alice: Episode 1 Recap"
by HanCinema is licensed under a Creative Commons Attribution-Share Alike 3.0 Unported License.
Based on a work from this source