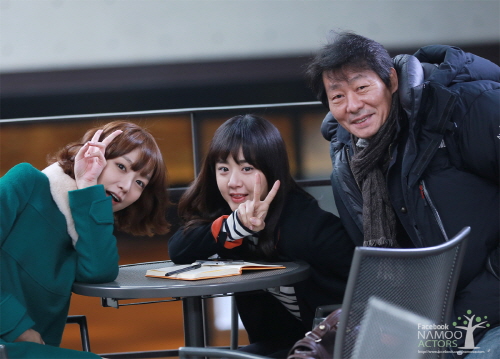 Actress Moon Geun-young took a picture with Shin So-yul who is starring in the SBS drama "Cheongdam-dong Alice".

In the picture revealed by her agency Namu Actors, Se-kyeong (Moon Geun-young) and Ah-jeong (Shin So-yul), who are best friends, are posing together for the camera.

Moon met Sin for the first time but awkwardness only followed for a short while before moon started taking care of Sin. They gave each other hot packs and went over their scripts together.

Director Bae Hong-soo is smiling proudly. Moon and Bae have worked together once in the SBS drama "Painter of the Wind" which awarded Moon with the Grand Prize.

Meanwhile, Moon's performance in the drama "Cheongdam-dong Alice" is earning her lots of great reviews so far.

""Cheongdam-dong Alice" Moon Geun-young with Shin So-yul"
by HanCinema is licensed under a Creative Commons Attribution-Share Alike 3.0 Unported License.
Based on a work from this source