Chinese 'The Host' Set in Sauna 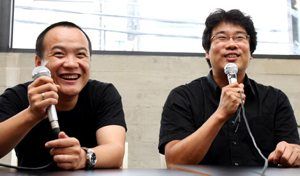 Chinese director Ning Hao has decided to set his remake of "The Host" (2006) in a sauna.

Ning, 31, announced his upcoming film at the discussion "CinDi Talk", in tune with the Cinema Digital Seoul Film Festival 2008 Aug. 22. Bong Joon-ho, the director of "The Host", also joined Ning at the session.

"The monster in the Chinese version of "The Host" will appear in a very unusual place. There are not many people at tourists resorts during the regular seasons, unlike the peak vacation season, so I thought it would be a good idea for the monster to jump out of a large sauna in one these resorts", Ning said.

He added that because people don't wear any clothes in saunas, there are no status or class issues.

Bong said he felt different when he heard about the Chinese version.

"I wondered how China, having a more similar sentiment to Korea, would interpret the movie. I was also pleased to know that Ning was producing the movie. After watching his movie `Crazy Stone', I thought he had a unique sense of wit and energy", sand Bong.

Ning also praised Bong's film by saying that he enjoyed watching "The Host" and that there were numerous scenes he wanted to bring to his own film.

"I like director Bong's movies because they have chase scenes. I also know that he pays attention to even the smallest details", said Ning.

A graduate from the photography department of Beijing Film Academy, Ning is one of China's up and coming movie directors. With his debut film "Incense" (2003) and his second "Mongolian Ping Pong" (2004), he was invited to numerous film festivals, including Berlin, Hong Kong and Busan. "Crazy Stone" (2006) was screened at the closing of the Pusan (Busan) International Film Festival in 2006.

"I think horror exists in our everyday lives. China does not have many fantasy films because it's a socialist state, and so the scenario of this will also be as realistic as possible", Ning said.

"Chinese 'The Host' Set in Sauna"
by HanCinema is licensed under a Creative Commons Attribution-Share Alike 3.0 Unported License.
Based on a work from this source