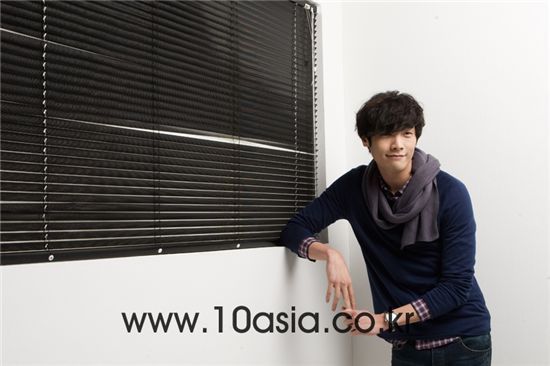 He was a teenager without a dream. He was not interested in studying and was tall yet clumsy. He then came across a flyer calling for auditions at a playhouse. He applied without giving a second thought and just like that, he made it. Becoming an actor was a coincidence for Choi Daniel -- like picking up a lucky penny on the side of a street or a falling leaf landing on your head. Choi appeared in KBS2's "Worlds Within" and also starred in several commercials but rather than looking for things to put onto his resume, defining himself as an actor was always more important to him.

"I increasingly started to realize that this is not an easy job while it's also the only thing I know how to do. At least with what I've been given". Of course, no matter how strong the desire, all hope will be lost if an actor is not given any work. Nevertheless, this young actor was able to make a successful debut in "World" by portraying the character of Yang Soo-kyung, who is a nuisance that cannot control his emotions. And now, he is gaining popularity with an entirely different role -- as the cold-hearted Lee Ji-hoon in MBC's sitcom "High Kick Through The Roof". That is why, despite his young career, it is not awkward associating this man as an actor. Even more so because he thinks analyzing his character Ji-hoon's emotions for Se-gyeong and Jung-eum is more important than simply gaining popularity for his role.

That is why Choi recommended songs which will give listeners the experience of "songs you might not think much of in the beginning but end up moving your emotions in some way".

1. Damien Rice "O"
"The song "The Blower's Daughter", was how I was introduced to artist Damien Rice. After listening to the title track from his album, I enjoyed the rest of the songs. Once on Christmas Eve and early Christmas day, I listened to the song "Delicate" for hours. To be honest, I should have gotten ready to go to bed but I can't help but listen to that song". The song "The Blower's Daughter" was featured in the movie "Closer" and singer Damien Rice rose to fame. To the singer love is 'delicate' and the song "Delicate" expresses the kind of songs he is known for. Delicate, subtle and sophisticated is the characteristics of Damien Rice's music.

2. Yang Dong-geun "Travel"
"Personally, I like his acting because he's very natural at it. Just like his acting his singing is natural as well. Maybe it is better to have Yang sing it. Besides his songs you can feel the sensitivity. In the album, I really like the song "You Sir" but since it has profanities you can't hear it in public". It would be wrong to call Yang Dong-geun an artist since this is the fourth full-length album featuring his outstanding B-boying skills and he also has an acting background. In his second album there is a song titled "Live Right" in which he poured out his true emotions that strengthened his identity as a hip hop musician. Just like what Choi Daniel said the offensive lyrics from "You Sir" shows the simple Rhyme that can be felt through his words like acting. Yang Dong-geun is a good example of the combination of an actor and musician.

3. Aerosmith "Armageddon Original Soundtrack"
"I don't really like rock or Aerosmith but when I heard "I Don't Want To Miss A Thing" from the movie "Armageddon" and I was blown away. I was especially impressed with the part when Steven Tyler belted out the "AH~". Rock legend Aerosmith contributed to the original soundtrack for the movie "Armageddon" which starred lead singer Steven Tyler's daughter Liv Tyler. The song begins with an instrumental from an orchestra which is different from their previous rock and roll songs. With all the instruments and the powerful vocals of Steven Tyler, it allows the listener that he is considered one of the rock's best vocalists.

4. Ryuichi Sakamoto "Playing The Piano"
"I like listening to piano instrumentals from Ryuichi Sakamoto or Yiruma. When I listen to "Merry Christmas, Mr. Lawrence" there is this calmness as if something happened and an optical illusion comes to mind". "Merry Christmas, Mr. Lawrence" is the first musical score from Ryuichi Sakamoto for the movie with the same title that featured Sakamoto's style of new age. With the introduction from a calming synthesizer sounds slowly moving into Asian rhythms with various melodies. Just like what Daniel said it will allow you to visualize optical illusions.

5. Leessang "HEXAGONAL"
"The song "Let's Meet Right Now" from Jang Ki-ha and Leessang is the song that plays when you call me. I really enjoy Jang's music and when I was shooting "Worlds Within" I was able to meet him at an event called Join Together Society. I wish they would hurry and release a second album". The sixth album from Leessang features song collaborations with Jang and other artists such as Lee Juck, Casker and YB that expands their musical abilities to another level. The song that Daniel has recommended brings together two artists with different song backgrounds that bring a cheerful yet chaotic anthem.

"Choi Daniel's Song Picks"
by HanCinema is licensed under a Creative Commons Attribution-Share Alike 3.0 Unported License.
Based on a work from this source