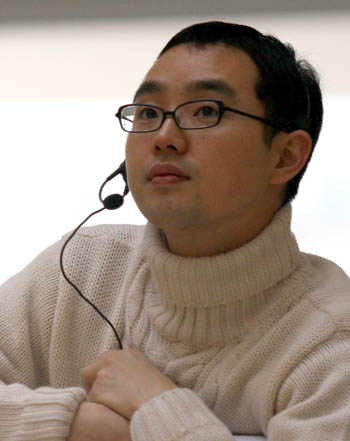 Chairman Kim Eui-suk of the Korean Film Council (KOFIC) appointed film director Choi Ik-hwan as the new head of the Korean Academy of Film Arts (KAFA) on Nov. 10 in Seoul.

Established in 1984, KAFA has played a leading role in producing some of contemporary Korean cinema's major filmmakers. Kim Eui-suk was actually one of the first graduates of KAFA before he directed the seminal hit "Marriage Story" (a.k.a. The Marriage Life). The school's alumni also includes directors such as Bong Joon-ho ("The Host"), Im Sang-soo ("The Housemaid - 2010"), Lee Jae-yong ("Untold Scandal"), and Heo Jin-ho ("One Fine Spring Day").

Himself a graduate of KAFA as well, Choi Ik-hwan made his feature debut in 2005 with "The Voice", the fourth in the hit Whispering Corridors girls' high school horror series. The film, which he wrote and directed, went to several festivals including the Sitges International Film Festival of Catalonia and the Udine Far East Film Festival.

Choi is also a graduate of the linguistics department of Seoul National University. He holds an MFA in filmmaking from the San Francisco Art Institute, and has taught as a professor at KAFA.