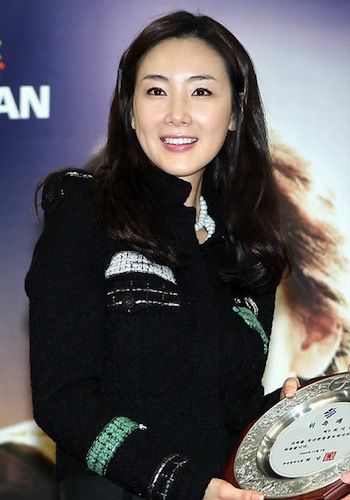 Actress Choi Ji-woo, whose character in the popular TV drama "Winter Sonata" moved the hearts of many, is poised to move the hearts of tourists visiting Busan. Choi was named PR ambassador for the city of Busan on December 3 by Busan Mayor Huh Nam-shik.

"I'm honored to become a PR ambassador for my hometown. I'm thankful to Busan residents for welcoming me", said the actress. She added, "I felt rewarded to see many Japanese tourists enjoying tteokbogki in Busan whenever I visited the city. I'll do my best to help Busan grow into a world-renowned tourist destnation".

The Pusan International Film Festival Plaza became a popular tourist attraction after Choi was seen eating street snacks there with actor Yoo Ji-tae, who appeared opposite her in the SBS TV drama "Celebrity's Sweetheart". The number of tourists visiting the area has surged 70 percent since then.

After the appointing ceremony, Choi attended an opening ceremony of the "Busan Tourism Information Center with Choi Ji-woo", which was held in Nampo-dong, Busan.

Her popularity skyrocketed in Japan for her role in the TV drama "Winter Sonata". In September this year, she participated in an event marking the airing of "Winter Sonata" in Japan. It was held at the Tokyo Dome and drew more than 50,000 fans.