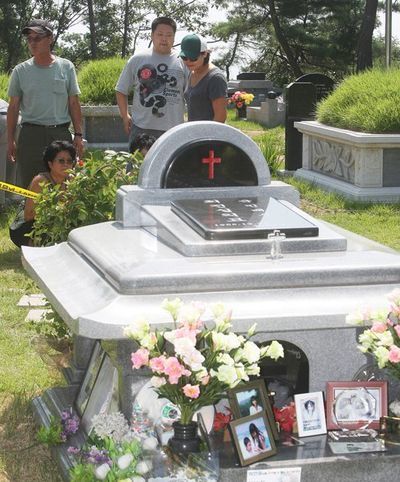 It has been three days since the ashes of the late actress Choi Jin-sil were stolen. The late actress's mother is staying at Choi's younger brother's house in Nonhyeon-dong, Seoul and praying for the safe return of the ashes.

Choi's mother was on the verge of fainting several times since she learned about the disappearance of the ashes on August 15. On August 16 she attended church to pray.

A person from Choi's former agency, who visited the graveyard along with Choi's family, said the bereaved family had been waiting anxiously for a call from police and praying because that it was all they could do. He said, "Like the actress's mother said on August 15, the most important thing at this point is the safe return of the ashes. The family is worried that even the jar containing the ashes could be damaged".

Several of Choi's close friends, including comedian Lee Young-ja, said they had seen the actress in their dreams a few days before her ashes were stolen. A person from Choi's agency said he visited Choi's grave two days before the incident because Choi had appeared in his dream and reproached him for visiting her so seldom.

Lee Young-ja also told the journalists from Yonhap News that she and other people who were close to Choi had been feeling unusually anxious a few days before her ashes disappeared.