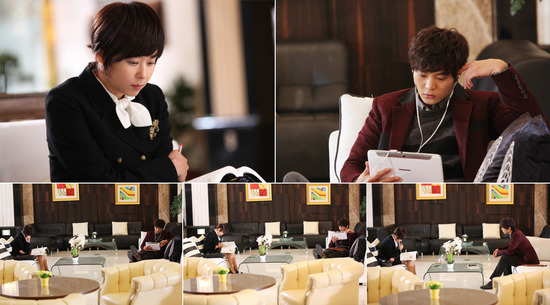 In the still cut revealed on the 17th, Seo-won (Choi Kang-hee) and Gil-ro (Joo Won) had to face each other without choice. Seo-won was there on a job and Joo Won was there in exchange for a new car and the awkward blind date turned into studying mode. The both of them didn't know they were both studying to get into the National Intelligence Service. However, a time goes, the way Gil-ro looks at Seo-won is different. He starts to fall for Seo-won.

This day's scene wore a mini skirt and her aura made several staff speechless.

In the recent racing scene, Choi Kang-hee and Joo Won showed great teamwork as if they had been friends for a long time.

Choi says, "I was comfortable with Joo Won since the beginning. It's like we've formed comradeship after going through the snow and all that".

Meanwhile, "7th Grade Civil Servant" is about the agents of the NIS lying for everything but love. To be aired in January after "Missing You".

"Choi Kang-hee and Joo Won in "My Girlfriend Is An Agent - Drama""
by HanCinema is licensed under a Creative Commons Attribution-Share Alike 3.0 Unported License.
Based on a work from this source