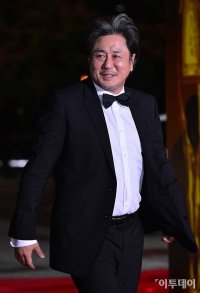 "I felt like I was riding a new car just out of a warehouse, starting from zero mileage. Now my heart is full of all sorts of ambiguous emotions -- I'm proud, relieved and empty, as if a passionate love is over". Thus Choi Min-sik after his first appearance in front of the audience after three years of absence. The star of "Old Boy" (2003) and "Sympathy for Lady Vengeance" (2005), Choi is known for his ability to captivate the audience with his charismatic acting.

But he has not been seen on screen since "Sympathy for Lady Vengeance", which is what made his appearance at the open talk session during the Pusan International Film Festival on Monday afternoon even more special. Since his name was mentioned in a bitter diatribe by director Kang Woo-seok about the exorbitant fees top actors demand, Choi has scarcely appeared in public, except during the one-man relay demonstrations calling for the screen quota for Korean movies to be maintained.

But then Choi chose "Himalaya, Where the Wind Dwells" by Jeon Soo-il, who is known for his art-house films. In the movie, Choi visits a village in the Himalayas in order to deliver the remains of a migrant worker who died in an accident in Korea to his family. He is the only Korean in the film; the rest of the actors were locally cast.

In the last three years, Choi said, something huge and extraordinary swept through his life, and he realized acting is something that he loves and is passionate about. "I was thirsty, and I was hungry", he says. He repeatedly stressed the word "starting point", and emphasized that the struggling Korean movie industry should relax and start over. "I felt both scared and ecstatic in front of the imposing mountain range", he recalled of the shoot. "It was an extremely difficult task, but I was happy to endure that hardship. No matter what the outcome may be, I am glad I chose this film". The Himalayas movie is to be released in Korea next spring, and, if all goes well, will be submitted to the Berlin International Film Festival.