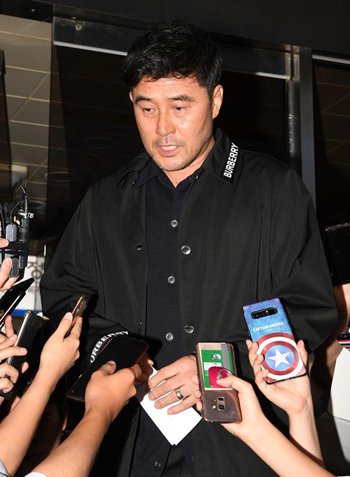 A Seoul district court gave actor Choi Min-soo a two-year suspended sentence for destruction of property and verbal abuse in a road-rage accident.

Choi picked a quarrel with another driver on a five-lane road in the financial district of Yeouido on Sept. 17 last year. He said that the other driver, who was running ahead of his car, had blocked his way by straddling two lanes. Choi overtook the car and stopped abruptly, which resulted in a fender-bender.

According to the ruling, Choi was forced to stop abruptly after the car ahead of him suddenly stopped while trying to enter a parking lot. That caused a passenger in Choi's car to spill a drink.

The actor then waited in front of the parking lot with the intention of threatening the other driver, who left the structure after being unable to find a parking spot. Choi blocked the other vehicle with his car and slammed on his brakes. Choi then gave him the middle finger and shouted obscenities.

"I simply followed the driver because he sped off following a fender-bender" Choi told the court. "I had no intention of threatening him or causing an accident".

But after reviewing CCTV footage, the judge dismissed Choi's claim. "The driving habits displayed by Choi not only instilled tremendous fear in the victim but entailed the risk of causing an accident, which did occur", the judge added. He pointed out that Choi continues to blame the other driver and has shown no remorse.

Choi told reporters afterwards, "If that is the law, then I have to accept it, but I do not agree" with the ruling. He added, "I gave the middle finger to the other driver, who spoke to me in a rude manner and threatened to end my acting career. I don't regret what I did and will not forgive him".

"Choi Min-soo Gets Suspended Sentence in Road-Rage Case"
by HanCinema is licensed under a Creative Commons Attribution-Share Alike 3.0 Unported License.
Based on a work from this source