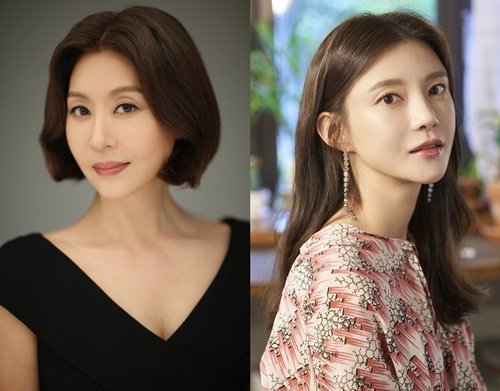 They are starring in the new KBS 2TV daily drama "Elegant Mother and Daughter" coming this 4th of November.

"Elegant Mother and Daughter" is a melodrama about a woman who was raised to be her mother's tool for revenge falling in dangerous love. The drama consists of revenge and romance, and is expected to overwhelm the viewers with its crucial story.

Choi Myung-gil takes on the role of Carrie Jung, a woman who loses her child and husband and turns into an incarnation of jealousy. Carrie Jung is a strong character whose life goal is to destroy her enemy's household. The queen of viewer ratings, Choi Myung-gil recently starred in the KBS drama "Mother of Mine", which ended with a successful rating as well.

Cha Ye-ryun plays Han Yoo-jin, a character who is swept away in the greed, evil deeds, grudges and revenge of grown-ups. Han Yoo-jin is an elite who has passion in her heart, but she is her mother's masterpiece for revenge.

The coming together of Choi Myung-gil and Cha Ye-ryun is rocketing anticipation. Both actresses have years of acting experience and are beautiful enough to draw all eyes on them. Since both of them have tasted success in their previous dramas, their synergy in "Elegant Mother and Daughter" is looked forward to.

"Elegant Mother and Daughter" begins on the 4th of November.

"Choi Myung-gil and Cha Ye-ryun to Star in "Elegant Mother and Daughter""
by HanCinema is licensed under a Creative Commons Attribution-Share Alike 3.0 Unported License.
Based on a work from this source