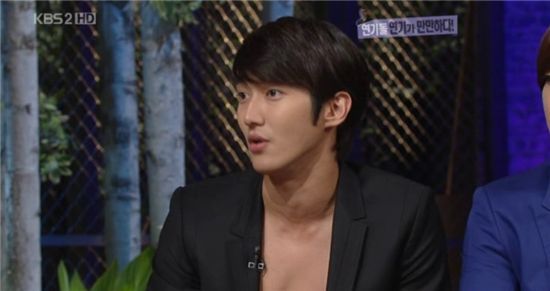 Super Junior member Choi Si-won, who recently starred in TV series "Oh! My Lady", has confessed that he had never dreamed of becoming a singer or an actor.

"It was not my dream to be a singer", the singer said during an appearance on KBS2 TV's celebrity talk show "Win Win", which aired Tuesday evening. "I just had the dream that I wanted to make my name known quickly and becoming a celebrity was the fastest way to do that, so I went to an entertainment agency".

When asked by host Kim Seung-woo if he had any fears about becoming an actor without any preparation, Choi answered, "It is very scary but if you don't take on a challenge because you are scared, what can you achieve in life?"

Choi, 23, debuted in December 2005 as one of the 13 members of idol group Super Junior, which quickly became one of the most successful K-pop acts throughout Asia. He is also a member of sub-group Super Junior-M, which focuses its activities in the Chinese market.

"Choi Si-won says "never dreamed of being a singer or actor" "
by HanCinema is licensed under a Creative Commons Attribution-Share Alike 3.0 Unported License.
Based on a work from this source