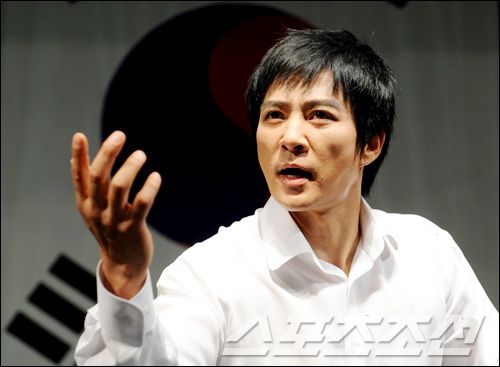 Interesting how dramas always come in pairs, right? There's "Grudge: The Revolt of Gumiho" and "My Girlfriend is a Gumiho", "The Fugitive Plan B" and "ATHENA", "Road No. 1" and "Comrades". Now "The Subsitute" vs. "President"?

Veteran actor Choi Soo-jong (most recently of "Comrades", and for those of you who remember the nineties, "Jealousy") has just been cast as the lead in the upcoming KBS drama "President" [프레지던트].

It looks to be a different take on the presidency as Daemul, because this one is set a few decades in the past, and focuses on one man's journey toward BECOMING the president, rather than a portrayal of a sitting one. But if President gets its act together faster than "The Subsitute" (which should be a piece of cake, considering all the production woes) then it's got a chance to steal some thunder if it's good right out of the gate.

Choi Soo-jong will play President-to-be Jang Il-joon, who starts off as a top-university law school graduate. He gets involved in student protests during the time of the overthrowing of the Yushin regime (President Park Chung-hee, assassinated 1979) and meets the greatest challenge of his life, instilling a new dream in the idealistic young man.

He becomes a civil rights lawyer, then a congressman, and then throws his hat into the presidential race, with the dream of moving the nation toward change. His will be a tale of overcoming all odds to become president, and of course, the intense love story that fuels him.

"President" will follow "The Fugitive Plan B", which follows "Bread, Love and Dreams". It premieres December 8 on KBS.