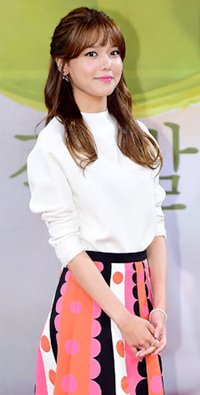 Choi Soo-young of K-pop girl group Girls' Generation is off to a good start in her acting career. Choi Soo-young landed her first starring role on a terrestrial TV channel with MBC drama "My Spring Days" which began airing on Wednesday.

"I felt a lot of pressure, but I was lucky to have a chance to work with Kam Woo-sung who gave me invaluable advice based on his long acting career", Choi Soo-young said.

"His words of encouragement helped me relax".

What does she think about romance developing between her and Kam, 20 years her senior?

"I feel rather comfortable because of the vast age gap", she said. "I'm having fun. I can't stop laughing during filming as I'm working with a great cast and crew".

"My Spring Days" is a melodrama about a woman who was given a new life after a heart transplant, and her romance with the husband of the organ donor.

"Choi Soo-young of Girls' Generation Sets Sail on Fledgling Acting Career"
by HanCinema is licensed under a Creative Commons Attribution-Share Alike 3.0 Unported License.
Based on a work from this source