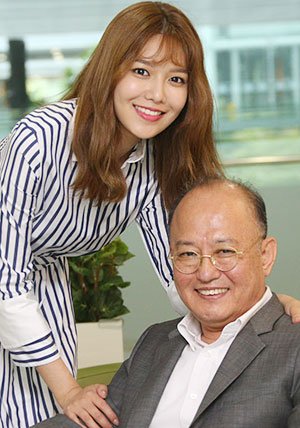 Choi Soo-young with her father

Choi Soo-young of girl group Girls' Generation was appointed as a promotional ambassador for the Korea Centers for Disease Control and Prevention on Tuesday to help raise awareness of rare diseases.

The government last year designated every May 23rd as Rare Disease Day.

"I often participate in fundraising concerts or charity bazaars for patients with rare diseases", Choi Soo-young said. "Last January I happened to meet researchers from the KCDC at a concert to help those who are visually impaired. That has led me to accept the offer to serve as a promotional ambassador".

Choi Soo-young's father also suffers from a rare disease called retinitis pigmentosa. He founded an organization in 2001 to help patients with visual impairments like himself, and it now has more than 7,000 members.

"My daughter helps to raise awareness for rare diseases", he said on Tuesday. "Through her efforts, some W30 million is raised every year and spent to help patients in need".