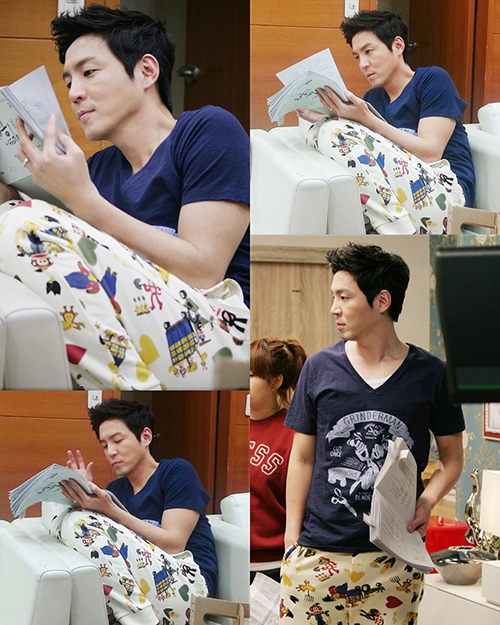 As if he's completely submerged in the mama-boy role in the MBC drama "A Thousand Year's Inheritance", he was seen wearing very cute pajamas.

Choi is wearing a pair of pajama pants with cute characters drawn all over it and is reading his script. Although he's a mama-boy his cute attire reflects the cute character of Kim Cheol-gyu.

The staff claims, "Choi Won-young chose the pajamas himself saying it would look right with the mama-boy character. He's always worrying about attire and hair. He's very hard working about it".

Netizen's say, "He's cuter the more you look at him", "I didn't know this at first but he's just so cute", "It's nice to see him like that hunched over his script" and more.

"A Hundred Year's Inheritance" is gaining more and more viewers with every episode and is slowly becoming a family time drama. It is aired every Saturday and Sunday at 9:50PM.

"Choi Won-young's cute pajamas"
by HanCinema is licensed under a Creative Commons Attribution-Share Alike 3.0 Unported License.
Based on a work from this source