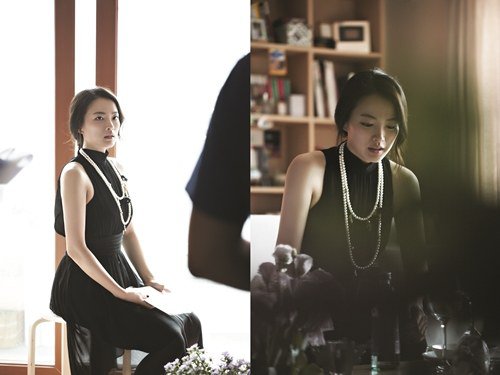 Chun Woo-hee is not a princess from "Han Gong-ju" anymore.

Stills of Chun Woo-hee from the movie "Prominent Woman" were released on the 14th.

Chun Woo-hee lives to the name of the title, as she is looking prominent in her black dress and pearl necklace.

In following her outstanding performance of Sang-mi the bond addict in the movie "Sunny - 2010", Chun Woo-hee left a mark as a princess in the movie "Han Gong-ju" which rounded up 220 thousand audiences as an independent film. This time, she's gone through a complete transformation as a successful magazine editor who has everything but love and friendship.

"Prominent Woman" is in celebration of the magazine Singles" 10th anniversary and it will be revealed through Naver TV on the 25th.

"Chun Woo-hee in upcoming film "Prominent Woman" as a single lady"
by HanCinema is licensed under a Creative Commons Attribution-Share Alike 3.0 Unported License.
Based on a work from this source