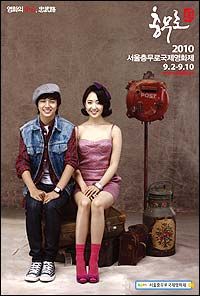 The fourth edition of the Chungmuro International Film Festival in Seoul (CHIFFS) kicks off Thursday  amid lingering concerns among both organizers and onlookers.

Through Sept. 10 it will screen 115 works from 30 countries  roughly half the number of works that were shown last year (236 films) and minus the competition session. As much as the festival's budget was chopped down to 1.5 billion won  a quarter of last year's  most of the sideline events and the invitation of foreign guests including judges have been called off.

"It is true that we were on the verge of being unable to hold this year's edition of the festival. Some within the organizing committee even suggested taking a break this year. But it is absurd for a festival to cancel because of a small budget", Kim Kap-eui, the festival's deputy chairman, told reporters last Friday at the Seoul Press Center. Other reasons he cited for pushing on with the schedule included the need to maintain relations with foreign cineastes and fear of further muddling conditions for future editions.

The press conference was rather underwhelming to say the least: The venue was packed with reporters curious to know how the festival was coping without Seoul City's funding, but there was rather limited information  or rather lack of those that could provide information. Park Hyung-sang, head of Jung-gu Office and chairman of the festival, festival director Kim Soo-yong and deputy director Zeong Cho-sin did not attend the session, nor did the festival's honorary ambassadors popular actors Kim Min-jung and Yoo Seung-ho.

Organizers said that absence of the chairman and co-chairman are gestures of their wish to resign. Chairman Park was recently detained for violating the Election Law.

Last year the festival operated on 60 billion won including 30 billion from Seoul City and 1 billion from Jung-gu Office. The deputy chairman said that the discontinued support from Seoul City was, however, not the main reason the festival faced cancellation. "We must question whether the Pusan (Busan) International Film Festival and other big film events are overdrawing on their financial plans. CHIFFS plans to cut back our spending and work on building substance", said Kim.

Meanwhile, despite the film festival's claim to be an "international" event, its English website has yet to be updated, with the latest being the announcement of finalists for the now scrapped competition session. A notice says that it received 1,170 submissions from 66 countries, a record number. But what matters most is quality, rather than quantity.

CHIFFS will be held through Sept. 10 at the National Theater of Korea and other venues around Myeong-dong and Chungmuro. Visit Open the link (Korean and English).
_________________
Actors Yoo Seung-ho, left, and Kim Min-jung on the poster for the 4th CHIFFS. The two were named honorary ambassadors in Seoul, Monday. / Courtesy of CHIFFS

"Chungmuro film fest opens amid muddle"
by HanCinema is licensed under a Creative Commons Attribution-Share Alike 3.0 Unported License.
Based on a work from this source