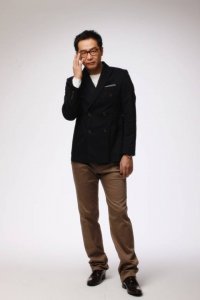 Director Jang Jin has made it big once again. His latest comedy 'Going by the Book' topped the box office in its first week and attracted 1.2 million viewers in ten days. It was number one in advance tickets on all reservation sites in the fourth week of October and has topped the box office for the second week. Jang's witty script about a mock bank robbery drill, coupled with new face Ra Hee-chan's directing and Jung Jae-young's seasoned acting, has grabbed audience attention. The film received a record score for a comedy in a preview screening. And since being released, word-of-mouth praise continues to spread.

Jang's prominent talent has been recognized in his work in both theater and cinema. He first made his name on stage when he won the 1995 Chosun Ilbo daily's literary contest in the drama category, after which he staged successive quality productions that won both critical and commercial acclaim. His first step in film was his participation in adapting the script for the 1995 Korean film "A Hot Roof". His following short film prepared him as a serious film director, and he debuted in 1998 with "The Happenings". The film showcased his unique style, combining elements of a thriller, comedy and musical and also earned him recognition in cinema. The success of his following films "The Spy" (1999) and "Guns and Talks" (2001) made him a star director with a sizable number of hardcore fans.

The unlikely starring duo of actor Jung Jae-young and actress Lee Na-young went hand in hand with Jang's style of producing in the melodramatic comedy "Someone Special" (2004). He plays the roles of director, playwright and producer as chief of his production agency Filmitsuda, which was launched March 2000 based on a prior cultural organization 'Suda' that he founded in 1999. Jang also creates Internet and mobile films as well as drama productions that all bear the hallmarks of Filmitsuda's trademark creative imagination and diverse style. He is at the vanguard of the next generation culture. Viewers encounter dialogue and expressions they haven't seen in previous films. The term 'fresh' is the compliment he's received the most since this dark horse of the drama field joined the film scene. This was due to his ability to craft a scene as if from a musical, but on the silver screen. But he knows that this isn't always a compliment.

The so called Jang Jin style scriptwriting and directing represents a number of characteristics - laughter from absurd dialogue, a series of offbeat events and ordinary but unique characters.

People often talk about the uniquely Jang style but hardly anyone pinpoints or explains what that is. His style does have a formula comprising humor, the cast and his way of directing. His movies are funny but the humor is not of a slapstick variety but is situation and dialogue-based high class humor. Some say his dialogue carries the tone of Japanese comedies, but that since it is borrowed from theatrical lines, is also out of the box--not too provocative and hilarious. His humor lies in the quirkiness that goes beyond existing norms and practices. Jang is also famous for his limited cast of actors. He usually casts his close actor friends he's known from theater and this group of people holds an important status in performance and film circles. The Jang style can be attributed to the aura of his select cast. The Jang style of producing is based on original plays that remains intact even on the big screen, and in the comfortable storytelling of ordinary lives and not of a certain social class. The characters of, for instance, and are not everyday people but Jang has the ability to nonetheless make the story relatable to all. Such public appeal that goes as far as to bring out the unconscious dialogue from the viewers' heart to the screen must result from his limitless passion for film and his ceaseless efforts.