CINEMA ON THE PARK Season 2 Announced! 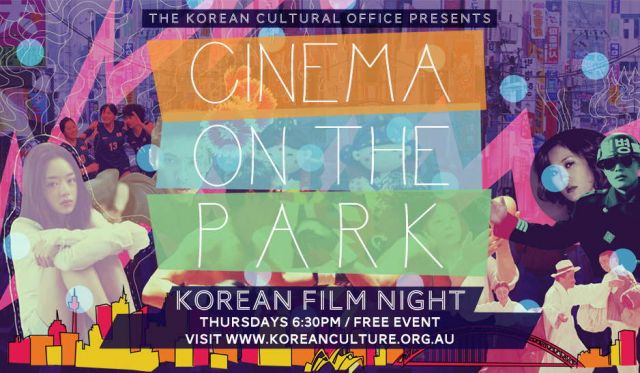 The Korean Cultural Office in Sydney has just announced another exciting Season of Cinema on the Park, the film night that delighted audiences in 2011 will return once again in 2012. A surprise hit with more than 1,000 people attending, Thursday nights are now etched firmly on the Sydney cinema calendar as Korean night and will see 21 feature films and 14 guest speakers in the first half of the year alone, surely enough to satisfy anyone's appetite for Korean cinema!

The screenings take place directly opposite Sydney's iconic Hyde Park at the Korean Cultural Office, in a multifunctional theatre that seats around 100 guests. It is a unique experience, as the theatre doubles as a modern art gallery, so make sure to take up the opportunity to look around! Season 2 promises an exciting program of films once again provided free for the general public. The curator of the event, Artistic Director of the annual Korean Film Festival in Australia, Kieran Tully says "I hope to give people a well-rounded view of the Korean industry, featuring key filmmakers and the important genres that have helped make the industry what it is today. I can't wait for it to start up again!"

The season launches a focus on Literature in Film, with Lee Chang-dong's mesmerizing "Poetry" (Feb 9), awarded Best Screenplay at the 2010 Cannes Film Festival. Also featured in this section are "SOPYONJE" (Feb 16) from Korea's most active director Im Kwon-taek, and the award winning animation "Oseam" (Feb 23). "Poetry" will be introduced by Canadian Film Festival Artistic Director Matt Ravier as the event aims to develop a dialogue around Korean film in Australia. Other guest speakers over the coming months include Russell Edwards of Variety, Julie Rigg of ABC National Radio's Movie Time, Fantastic Asia Film Festival Director Neil Foley, and Australian artist Yvonne Boag, whose works will be featured in an upcoming exhibition at the office.

Korea is known for their hardcode crime thrillers and Cinema on the Park has an excellent selection of X-treme Korea in March, including brand new hits "The Man From Nowhere" (Mar 1), "I Saw the Devil" (Mar 8), "The Chaser" (Mar 15) and a must watch, Na Hong-jin's "The Yellow Sea" (Mar 22). A Special Screening of Park Ki-yong's documentary response to the Christchurch earthquakes "...ing" (Mar 29) will mark the New Zealand Korea Year of Friendship 2012, with the screening followed by a Q&A with producer Michael Stephens. April sees the works of world renowned art-house directors take the limelight in Dramatic Relationships, with Park Chan-ok's "Paju" (April 5), Im Sang-soo's A" GOOD LAWYER'S WIFE" (April 12), Hong Sang-soo's "The Power of Kangwon Province" (April 19) and Kim Ki-duk's "Birdcage Inn" (April 26) all featured.

The program then takes a look back at the developments the Korean industry has made in recent years, with an analysis on the phenomenon that is the Korean Wave and the Birth of the Blockbuster. Classic hits "Shiri" (May 3), "JSA - Joint Security Area" (May 10) and "The Host" (May 24) screen which if you haven't seen, now is your chance. Also featured is the delightful surprise success "The Way Home" (May 17). To round out the selection an inspiring program of Sporting Triumphs screen in June in the lead up to the London Olympics, including Kim Jee-woon's "The Foul King" (Jun 7), Ryoo Seung-wan's "Crying Fist" (Jun 21) and Yim Soon-rye's "Forever the Moment" (Jun 28). For full program details see the Korean Cultural Office website.

No matter if you've seen hundreds of Korean films, or not even one, Cinema on the Park is the perfect event for Sydneysiders, catering for Korean cinefiles and newbies alike. If you have an interest in film, culture or Asia, you owe it to yourself to check it out. Films screen every Thursday night from 6:30pm at the Korean Cultural Office in Sydney, and have English subtitles making them accessible to all. Entry is free but booking is required, which you can do online, over the phone or in person. Details at www.koreanculture.org.au or contact cinema@koreanculture.org.au 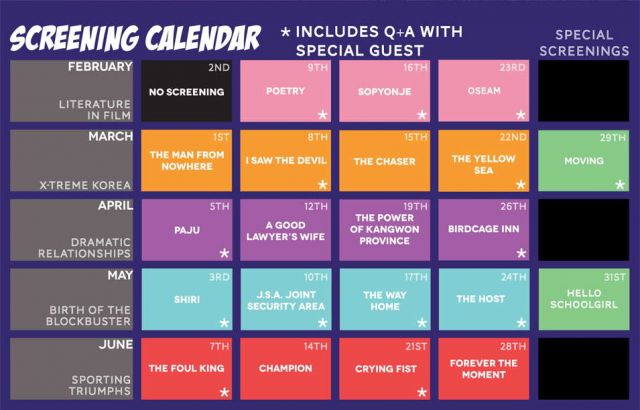 "CINEMA ON THE PARK Season 2 Announced!"
by HanCinema is licensed under a Creative Commons Attribution-Share Alike 3.0 Unported License.
Based on a work from this source