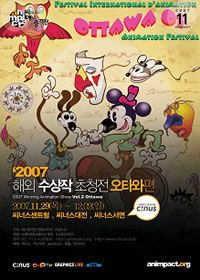 The world's first monthly animation festival, CINUS Animpact, goes national as it is is held in CINUS Central in Seoul, CINUS Seo-myeon in Busan, and CINUS Daejeon in Daejeon for four days from Nov. 29 to Dec. 2, 2007.

Particularly noteworthy is that most of the invited works are to be premiered either in Korea or in Asia. This way, CINUS Animpact will serve as a good opportunity for checking out the current trends in the world animation scene.

CINUS Animpact, which used to tour around the country, will showcase its program in three regions simultaneously starting this November. "These regions were ones that our audiences made the most requests for CINUS Animpact", said the organizers of CINUS Animpact. "In the future, we will continue to increase the number of regions for CINUS Animpact, and ultimately, we will establish a national simulcast system so that the nation can have better and easier access to high-quality animation".