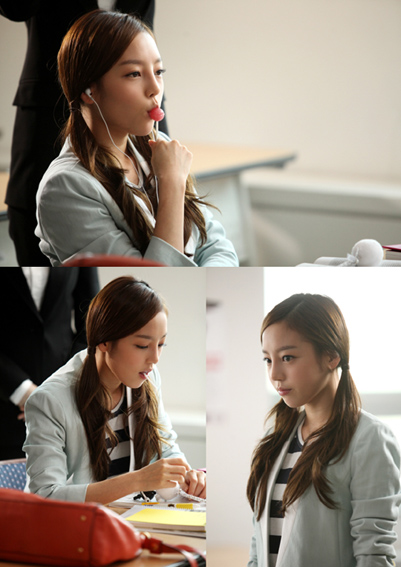 Goo Ha-ra is the youngest daughter of the president with a bubbly personality in the SBS drama "City Hunter" coming on the 25th.

Goo Ha-ra's 'candy girl' is when the president's daughter Da-hye attends an academy to get into university and takes lessons with her bodyguard Na-na (Park Min-young). She should be studying hard but with no passion to enter university, Da-hye listens to music through her earphones or acts indifferent while eating candy.

Goo Ha-ra looked as if she was possessed by this repeater character with her hair tied in two in an academy at the beginning of April. Looking displeased at the fact of having a bodyguard follow her around because she is a president's daughter, Goo Ha-ra managed to looked bad tempered and childish.

Goo Ha-ra is also known as the 'cutie Ha-ra Goo' among the staffs and actors. Especially the Goo Ha-ra licking a lollipop caught everyone's eyes it seems.

Da-hye in the drama throws love bombs at Yoon-seong (Lee Min-ho). The love propose Goo Ha-ra will show towards Lee Min-ho is highly looked forward to.

The productions say, "The character of Da-hye and Goo Ha-ra are alike in many ways. She is enthusiastic towards acting and sincere so it might be worth looking forward to her as an actress and not a singer".

""City Hunter" Goo Ha-ra cute split hair "Candy girl""
by HanCinema is licensed under a Creative Commons Attribution-Share Alike 3.0 Unported License.
Based on a work from this source