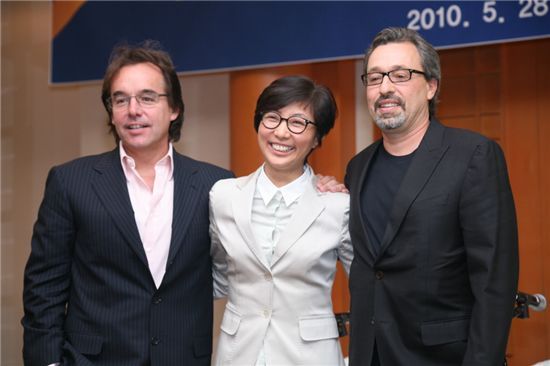 At a press conference on Friday, CJE's CEO Katharine Kim and 1492 CEO Chris Columbus announced plans regarding their joint production of the films and development of future development strategies.

The two firms had struck a deal in November last year through which they agreed to cooperate on their global businesses based on a strategic partnership where for the next three years, CJ has the rights to produce and develop productions by 1492 as well as be given the priority to distribute and invest in those productions in Korea, Japan and China.

CJ and 1942 are currently planning and writing three movies based on action, fantasy, adventure which will be shown in 3D -- each titled, "Killer Pizza", "Carpe Demon" and "The Graveyard Book", respectively.

"The partnership between 1492 Pictures and CJ Entertainment is truly inspiring. We have no doubts that the upcoming co-produced movies will do well in the global market", explained 1492 Pictures CEO Chris Columbus.

1492 Pictures was founded in 1995 by famed director Chris Columbus, and Michael Barnathan and Mark Radcliffe run the company as well. They have produced the first three "Harry Potter" pictures, "Night at the Museum" and "Percy Jackson and the Olympians: The Lightning Thief".

CJE is one of the biggest production and distribution companies in the country, responsible for the success of several Korean films including "Haeundae" and "JSA - Joing Security Area".