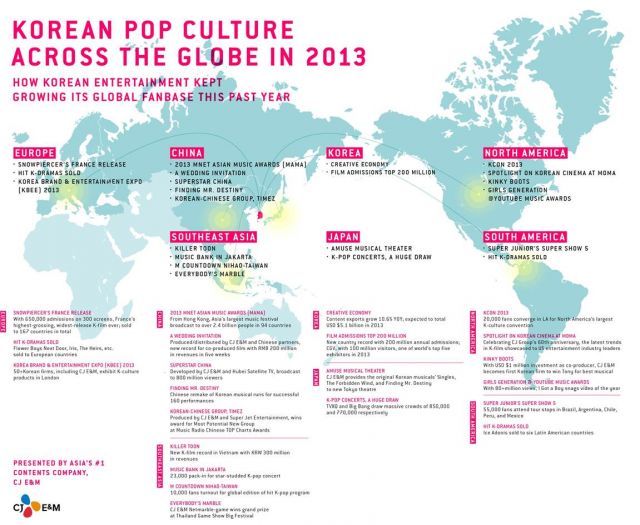 In 2013, Korean content exports grew an estimated 10.6% year-on-year to reach USD $5.1 billion according to the Korean Ministry of Culture, Sports and Tourism. The number of worldwide "Hallyu" fans also increased to 9.3 million by year's end per figures from the Korea Foundation.

As the nation's leading content company, CJ E&M played a pivotal role in driving this global growth by introducing attractive and diverse media, films, music, games, and live performances to regions around the world.

Greater Asia
With Korean content enjoying tremendous popularity across Asia, CJ E&M aggressively expanded its offerings in the region this past year.

On the mainland, CJ E&M worked strategically with Chinese partners to produce hit content, including with China Film Group, on the romantic comedy A Wedding Invitation, which broke records for a co-produced film with KRW 37 billion in revenues in five weeks. CJ E&M also partnered with Hubei Satellite TV to co-produce Superstar China, an adaption of the popular Korean audition show Superstar K, which was broadcast to 800 million viewers in China. As part of their training and development, select Superstar China contestants also had the opportunity to utilize CJ E&M's newly opened M-Studio in Beijing, a professional voice and dance training studio with curriculum designed by leading K-pop artist' choreographers and voice coaches.

Debuting this past October, TimeZ, a Korean-Chinese idol group co-produced by CJ E&M and Super Jet Entertainment, walked away with the Most Potential New Group award at the Music Radio Chinese TOP Charts Awards.

On the musical front, the Chinese remake of "Finding Mr. Destiny", the comedic story of a young woman desperate to find her first love, ran for a successful 160 performances. The co-produced musical The Princess also received stellar reviews from Chinese audiences for its colorful performance about Chinese traditional food mingled with contemporary music. In the world of mobile games, Everybody Cha Cha Cha, developed by CJ E&M Netmarble, tallied a record 800,000 downloads per day in China.

Highlighting its growing influence in the American entertainment industry, CJ Group, parent company of CJ E&M, showcased the latest in Korean film to US entertainment leaders at its "CJ's 60th Anniversary – Spotlight on Korean Cinema" event held at The Museum of Modern Art (MoMA) in Manhattan in November. The company also agreed to donate the rights of 10 Korean films to the museum. An earlier event, in partnership with the Motion Picture Association of America (MPAA), was also held in Washington D.C. in May with influential US political leaders attending.

On Broadway, as co-producer with USD $1 million investment, CJ E&M became the first Korean producer to win a Tony for best musical when Kinky Boots snagged six medallions at the prestigious awards ceremony in June. The musical is scheduled to make its Asian debut in Korea in November 2014.

In July, CJ E&M and legendary U.S. music producer Quincy Jones entered into a partnership to promote K-pop's continuous global expansion. As part of the deal, a joint fund was established to help Korean musicians study at the Berklee College of Music in Boston.

The reach of Korean content, particularly on the drama front, also expanded into Latin America in 2013. Among other titles, CJ E&M's revenge drama Ice Adonis was sold to six countries across the region.

Europe
In 2013, Korean dramas made a name for themselves in Europe with numerous titles sold across the region including CJ E&M's romantic comedy "Flower Boy Next Door" (England, France, Belgium, Switzerland, the Netherlands, and Luxembourg). According to data from the Korea Trade-Investment Promotion Agency, the export value of Korean dramas to Europe now amounts to approximately KRW 1 trillion.

CJ E&M's mega hit "Snowpiercer", by Korean director Bong Joon-ho, also made its international debut in France to sweeping success. Shown on 300 screens nationwide, "Snowpiercer" recorded 650,000 admissions becoming the highest-grossing Korean film ever in the country. Including France, "Snowpiercer" has now been sold to 167 countries in total.

The Bodyguard: The Musical, for which CJ E&M served as co-producer and only partner from Asia, ran for a successful 500 performances at the West End, winning Best New Musical at the WhatsOnStage.com Awards 2013, and also being nominated for four Olivier Awards.

Finally, in November, more than 50 Korean companies, including CJ E&M, participated at the Korea Brand & Entertainment Expo in London, exhibiting a variety of Korean cultural products from K-pop to fashion to design.

In 2014, stay tuned for news and announcements as CJ E&M continues to introduce new and exciting content to a location near you.