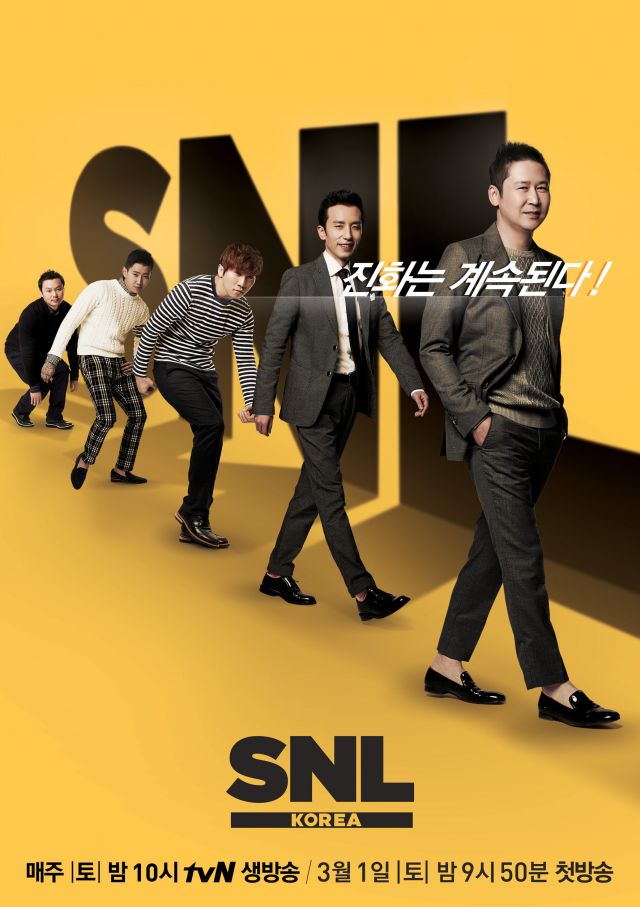 Asia's No.1 Contents Company CJ E&M [http://en.cjenm.com] successfully began airing the fifth season of Saturday Night Live Korea (SNL Korea) on its general entertainment channel tvN on March 1. With a production strategy focused on the regular refinement of show content to match the tastes of Korean viewers, CJ E&M's adaptation of the iconic American comedy show has been a benchmark example of the successful localization of overseas content for the Korean market. The season five premier was the top-rated show in its time slot among pay TV channel programs, and also the number one show among female fans (teens to 40s).

Since first airing in Korea in December 2011, the arrival of America's longest running live comedy show has infused fresh air and dramatically changed the climate of Korean media with its hilarious and satirical portrayals of social and political issues. Moreover, SNL Korea's humorous discussions of adult-themed topics have been viewed as bold and progressive, winning a following among a younger generation of Korean viewers. Special appearances by K-Pop idol celebrity hosts (normally only seen in their full performance attire and make-up) "letting their hair down" for the show have also generated strong buzz and attention.

"What's been so exciting about working on SNL Korea is the process of taking a beloved comedy program and constantly brainstorming and coming up with creative new ways to localize the show to the Korean market", said Ahn Sang-whi, Chief Producer of the program. "As SNL Korea enters its fifth season, which coincides with the celebration of the show's 40th anniversary in the US, we've prepared diverse improvements to entertain and engage viewers even better".

This season, SNL Korea will introduce various enhancements designed to bring the excitement of the show even closer to viewers, as well as leverage Korean's advanced digital environment. For instance, to enhance interaction with viewers, the show will begin accepting fan questions via SNS. Also, in a redesign of the studio, the physical distance between stage and audience has been reduced, and the number of seats doubled. A modification to the popular Weekend Update segment, People Update, will also be introduced involving more interaction with the host. The new season will also include more storylines tailored for female viewers. Season five of SNL Korea also welcomes Narsha of K-Pop group Brown Eyed Girls to the crew.

A global leader in the export and import of TV program formats, CJ E&M has actively acquired and effectively localized various overseas formats for the Korean market including Project Runway, America's Next Top Model, MasterChef, and Top Gear.