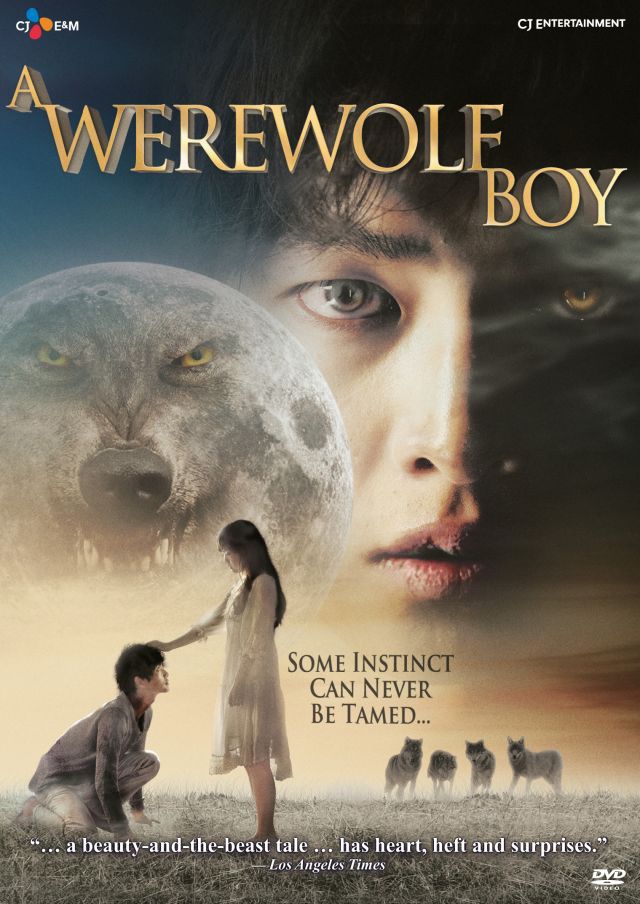 Some Instincts Can Never Be Tamed ... Is It Possible He Continues to Wait for Her?

Sometimes love can wait a lifetime in the romantic fantasy "A Werewolf Boy", captivating DVD Aug. 13 from CJ Entertainment America.

An unexpected phone call summons an elderly woman, who has lost interest in life, back to Korea and the remote cottage in the countryside where she spent a tumultuous time in her youth. Memories overwhelm Suni (Park Bo-young) of a feral and mute orphan (Song Joong-ki) who the family took in ... only to discover that he was a creature never meant to exist.

But damaged by life's struggles herself, the beautiful, young Suni is patiently determined to tame the "wolf boy" and teach him to live among people. In return, he repays her uncommon kindness with unparalleled devotion. When a threat to Suni brings out the boy's unrestrained, bestial instinct, he abruptly becomes the target of the villagers' fears. To save his life, Suni must abandon him, but promises she will return ... Is it possible he continues to wait for her?

Because of the movie's huge success, a book was published based on the original screenplay.

"A Werewolf Boy" is presented in widescreen (aspect ratio: 2.35:1) and Korean 5.1 Dolby Digital sound and Korean 2.0 digital stereo with English subtitles. Special features include: "Making of", "The Language of Cheol-su" and "Beautiful Wolf" featurettes; deleted scenes; deleted scenes with commentary; and poster shoot.

About CJ Entertainment America
Launched in 2005, CJ Entertainment America (CJ Ent.Am) is the U.S. arm of Asia's premier entertainment company and Korea's #1 filmmaker and distributor, CJ Entertainment & Media (CJ E&M). Since 1995, CJ E&M has provided original, award-winning content – across an array of genres, including drama, comedy, action, sci-fi/horror and special interest – for theatrical, television, DVD, digital download, interactive game publishing/portals and music. A prominent investor in entertainment co-ventures in overseas markets (including 1492 Pictures, DreamWorks and IMAX in the U.S.), CJ E&M also develops and operates 200 premium multiplex theater sites under the CGV Cinemas banner (including a flagship site in Los Angeles) and is a leading concert promoter, helping establish "K-pop" as a successful world music genre. The cornerstone of the Korean entertainment industry – boasting the country's largest and most significant library, with hundreds of films – CJ E&M is also a singular presence throughout Asia, Europe and in the States and a key force in popularizing contemporary Korean and Pan-Asian cinema around the world. Top films include "The Man From Nowhere"; "The Good, the Bad, the Weird"; "A Bittersweet Life"; "JSA - Joint Security Area"; and the Vengeance trilogy ("Sympathy for Mr. Vengeance", "Old Boy" and "Sympathy for Lady Vengeance"), to name a few. Visit us online at: www.cjent.co.kr/eng (English) or www.cjent.co.kr (Korean).