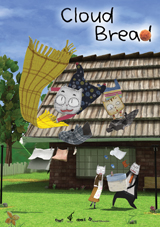 Nominees at this year's Annie Awards include the talent behind such big titles as "Toy Story 3″, "Tangled", "Despicable Me" and "How To Train Your Dragon" from the major studios.

But, we're proud to note, that in the category of Best Animated Television Production for Children, alongside the well-known titles from Cartoon Network and Nickelodeon – including, yes, that household name "SpongeBob SquarePants" – there's a Korean production called "Cloud Bread", from GIMC.

GIMC describes "Cloud Bread" as a 3D fantasy adventure targeting kids aged three to six. The synopsis reads: "One rainy morning, two curious children find a small piece of cloud snagged on a twig. They take it to their mom and she bakes it into bread. When they eat it, they begin to float like clouds. This wonderful new series combines stories full of warmth & strong values with all the fantasy & whim of a child's imagination. Cloud Bread takes us into a world of striking animation design, brought to life in three dazzling dimensions".

The Annie Awards, animation's highest honors, will be held Feb. 5 (Sat.) at UCLA Royce Hall in Los Angeles. The Annies are presented by the International Animated Film Society, ASIFA-Hollywood.http://www.annieawards.org/consideration.html