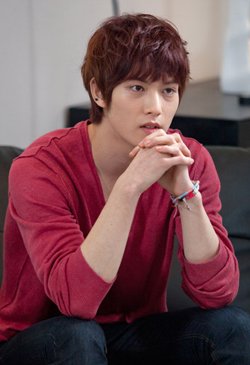 The SBS drama "A Gentleman's Dignity", which has garnered high viewer ratings, focuses on the romantic entanglements of a group of middle-aged men, but it is a handsome younger man that is grabbing viewers' attention. He is Lee Jong-hyun, member of the idol group CN BLUE, who plays the role of a young boy who makes his way to Korea from Japan in search of his real father.

Lee flashes his charm on his acting debut and was brought in to appeal to a younger audience demographic among a cast of veteran actors -- Jang Dong-gun, Kim Soo-ro, Kim Min-jong and Lee Jong-hyuk.

"I rarely cry, even when watching tear-jerkers or moving dramas, but now I often find my eyes filled with tears as I get more involved in the role", said Lee. "I discovered another side of myself through acting".

Lee said it was hard to play the role because the character is a man of few words. "I initially thought it would be easier as there weren't many lines, but it was more of a challenge because I had to express a wide range of emotions through gestures and expressions", he said.

"I read the script whenever I had time, but when the cameras started rolling, I tried to forget what I had rehearsed so I could act more naturally, thinking that if I were him, what I would do in this or that situation", he said.

Dialect was another concern as Lee was born in Busan, a region known for its thick brogue. He said he refrained from talking with people who speak the same dialect and even reduced the amount of time spent speaking to his family by phone.

A perfectionist, Lee said his weaknesses as an actor continue to haunt him, and pointed to the parts of the script where he has to speak Japanese as something that tripped him up.

"I lived in Japan for four years, so I have no problem speaking in Japanese for everyday conversation, but my lines sounded awkward at first on-screen", he said. "I realized speaking a language, and acting using it, are two completely different things".

He said he was hesitant to try his hand at acting initially out of fear that he would not be able to rise to the challenge, but that now his confidence has been buoyed.

"Now I've started acting, I will keep trying to improve my skills to meet the expectations of my fans", he said, adding that he wants to move into action movies.

"I feel confident that I can perform action scenes myself, without a stuntman, as I used to practice judo. I'm sure I can do it really well".