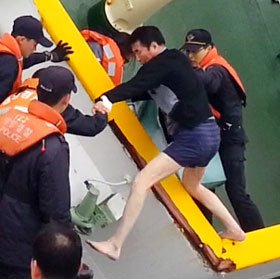 Lee Joon-seok, the captain of the sinking ferry Sewol, escapes with the help of coast guards on April 16. /Newsis

The Korea Coast Guard not only fumbled the initial stages of rescuing passengers as the ferry Sewol sank on April 16 but gave the captain preferential treatment.

Lee Joon-seok (69) was rescued around 9:46 a.m. on April 16, just after the ferry had capsized off the southwest coast. As the ship listed 40 to 50 degrees on its side, Lee stumbled out of the steering cabin clad in his underwear, apparently intoxicated, and hopped on to a rescue boat.

Lee then lied about his identity as he set foot in the nearby port of Jindo along with his other crew at 11 a.m. Emergency medical workers in the port asked a coast guard who the man was and was told that he was the captain.

That means The Coast Guard knew who Lee was when they picked him up.

But Lee was not subjected to a breathalyzer test, and when questioned later, he flatly denied he was drunk at the time of the accident.

After a medical checkup at a makeshift clinic set up in the port, Lee wrapped himself in a blanket and was sent to a regional hospital at around 1 to 2 p.m. It was much later that afternoon that The Coast Guard sent Lee back by helicopter to the scene of the accident.

A coast guard said they sent Lee back because he was deemed to be the most knowledgeable about the Sewol and could assist in saving lives. But by then the ferry had gone under completely.

Lee was then carried by helicopter back to The Coast Guard station in Mokpo after 9 p.m. and questioned as a witness, but a coast guard said the interview was cursory and established only whether he was physically able to be questioned.

Lee was interviewed a second time on April 17 for around 11 hours. At 10 p.m. that night, he was whisked off to a home in downtown Mokpo after throwing off curious reporters and taken to the home of an in-charge.

An investigator said Thursday, "At the time, Lee was just a witness and we had no authority to jail him, so we had no choice but to take him to the investigator's home".

Lee was arrested on April 19, after an investigative taskforce was launched.

"Coast Guard Gave Special Treatment to Ferry Captain"
by HanCinema is licensed under a Creative Commons Attribution-Share Alike 3.0 Unported License.
Based on a work from this source