Comedian Jeong to Walk Air Stewardess Down Aisle Next Month 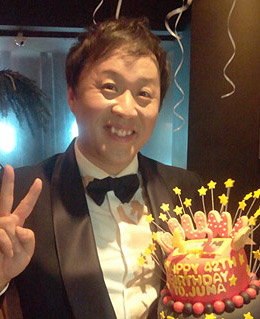 Jung Joon-ha will marry a Korean-Japanese woman 10 years his junior, on May 20 in Seoul, the comedian announced at a press conference on Monday. He said that the couple's families met over the Lunar New Year's holidays in Osaka, where her family lives.

Jeong first met his betrothed, a flight attendant, in 2008 and they have been dating ever since. He openly mentioned his girlfriend on TV, referring to her by the nickname Nemo, taken from the animation "Finding Nemo". He said his girlfriend calls him "Shrek".

"Ever since I met my bride-to-be, my heart has become brighter and clearer", Jeong said.

"Comedian Jeong to Walk Air Stewardess Down Aisle Next Month"
by HanCinema is licensed under a Creative Commons Attribution-Share Alike 3.0 Unported License.
Based on a work from this source