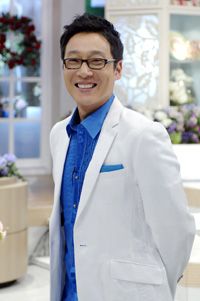 Comedian Lee Hwi-jae will marry a florist, eight years younger than him, on Dec. 5, according to TN Entertainment.
The 38-year-old met the would-be bride one year ago through a blind date arranged by his close aide.

The management agency said that she is beautiful and has mild personality. "Two families of the couple met each other and are searching the wedding ceremony venue", the company said.

Before the announcement of the marriage, Lee often mentioned her in his show "Sebakwi" (Quiz to Change the World). The couple dated at concerts earlier this year.

He studied acting at the Seoul Institute of the Arts. Lee made his debut in 1992 as comedian after working as a floor director for MBC's entertainment program "Sunday, Sunday Night". He shot to stardom in the program titled "Life Theater". Since then, he has expanded his career to hosting variety shows such as "Sang Sang Plus", "Sponge" and "Sebakwi".

"Comedian Lee to marry florist on Dec. 5"
by HanCinema is licensed under a Creative Commons Attribution-Share Alike 3.0 Unported License.
Based on a work from this source