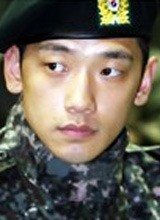 Singer and actor Rain, who has been grounded for bunking off military duties to meet his girlfriend, sought to be transferred to the frontline when the scandal came to light, the military claimed Tuesday.
Rain voiced the wish in a meeting with his senior officer after the scandal emerged", a military spokesman said. But the military denied the request despite growing public pressure to act, on the grounds that a conscript cannot apply for completely different assignment.

Rain, who serves with the entertainment corps, has spent over 90 days off base, vastly more than ordinary conscripts can hope for.

Rain also reportedly complained that the scandal casts a negative light over his entire military service. The spokesman quoted him as saying he did his best in the entertainment corps and was troubled by public perception that he has enjoyed an easy sinecure.

Rain has been lightly disciplined for only three absences. According to the Defense Ministry, Rain left the base citing official duties on Nov. 23, Dec. 2 and 9 to work on a song for a military event at a recording studio in Gangnam. On all three occasions he met up afterwards with his girlfriend, the star actress Kim Tae-hee, who then dropped him off at his base an hour or two later.

Grounded for just a week, Rain wrote a letter apologizing for causing problems for the entertainment corps and pledged to do his best in his remaining seven months of military service.