Controversy Brews Over Death After Bite of Actor's Dog 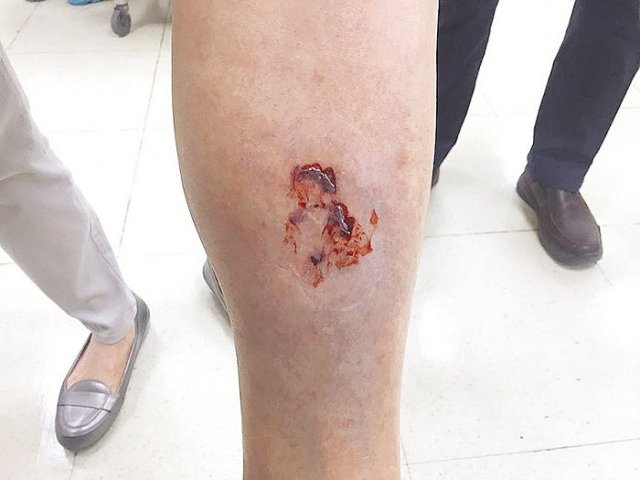 A photo released by Seoul Paik Hospital shows the wound of the woman who was bitten by Choi Si-won's dog.

Controversy is brewing over the exact cause of the death of a neighbor who was bitten by singer and actor Choi Si-won's French bulldog.

Choi's family on Tuesday submitted test results from a vet showing the dog carried no trace of Pseudomonas aeruginosa -- the official cause of the neighbor's death -- in its mouth.

Choi and his family have come under severe criticism since the incident was belatedly reported last week.

The family of the woman, who was the owner of a well-known Korean restaurant, claim she died of blood poisoning resulting from the dog bite.

But experts say dogs rarely carry Pseudomonas aeruginosa in the mouth and have suggested that the victim may have been infected at the hospital where she was treated for the bite.

Gangnam District Office fined Choi's father, the owner of the dog, W50,000 for failing to restrain the pet with a leash but took no other action (US$1=W1,129).

The bacteria were found in the victim's blood and saliva. One doctor said, "There are only six documented cases around the world where a dog bite caused blood poisoning due to Pseudomonas aeruginosa".

A more common germ transferred to humans by dog bites is staph, which can be treated with simple antibiotics and is rarely fatal.

Pseudomonas aeruginosa, on the other hand, is commonly found in hospitals and is highly resistant to disinfectants.

Photos of the wound revealed by Seoul Paik Hospital where the victim was treated show vicious teeth marks measuring 2 to 3 cm around her left knee. The victim's brother-in-law, a doctor at the hospital, said, "Infections from the hospital usually occur in patients who have been bedridden for long periods of time or suffer from weak immune systems, but the deceased was healthy with no history of diabetes or cancer".

"What else could be the source of infection after the victim was bitten by a dog hard enough to cause skin and blood vessels to rupture?" he added.

Seoul Paik Hospital in a formal statement Wednesday said it was "highly unlikely" for a patient who was treated for just around an hour in the hospital to have been infected with the bacteria there.

"Controversy Brews Over Death After Bite of Actor's Dog"
by HanCinema is licensed under a Creative Commons Attribution-Share Alike 3.0 Unported License.
Based on a work from this source