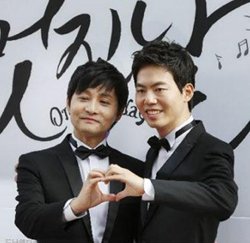 A court on Wednesday ruled against a same-sex marriage bid by film maker Kim-Jho Gwang-soo and his partner Kim  Seung-hwan.

The two sued the Seodaemun district office for refusing to register their marriage, but the Seoul Western District Court sided with the office.

The court accepted that times have changed but said in the absence of specific legislation the district office was correct in refusing to register the marriage.

"Both the constitution and civil law are predicated on the notion of a conjugal bond involving different sexes", it said.

The two men celebrated their wedding in September 2013.

"Court Rejects Same-Sex Marriage Bid"
by HanCinema is licensed under a Creative Commons Attribution-Share Alike 3.0 Unported License.
Based on a work from this source