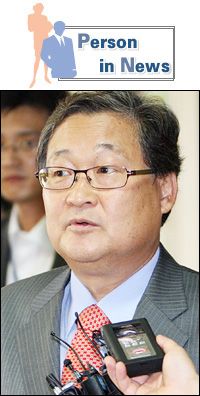 By Do Je-hae
Staff Reporter

Judges ruled Thursday in favor of Jung Yun-joo, former president of the nation's largest public broadcaster, who filed a lawsuit against President Lee Myung-bak for his dismissal from KBS's top post for alleged poor management in 2008.

The ruling is widely seen as a victory for Jung, who has had rocky relations with the conservative Lee administration due to his liberal political leanings. Jung was handpicked by then President Roh Moo-hyun as KBS chief in 2003 and reappointed to a three-year term set to expire late this year. Even if the Supreme Court ultimately rules in his favor, it is unlikely that he will resume his post.

"The ruling serves as a warning to the Lee administration's disregard for democratic procedures", the ex-president of KBS said, expressing his satisfaction. He indicated that he has no aspirations of returning to his post.

"We recognize that there were certain cases of mismanagement, but they do not constitute proper grounds for dismissal", Judge Jung Hyung-shik of the Seoul Administrative Court said. "We have therefore ruled that the dismissal should be revoked, as there were procedural deficiencies".

Jung was acquitted earlier this year of breach of trust charges. He had been charged with causing 189 billion won in losses to the public broadcaster by dropping a lawsuit in which the company sought a corporate tax refund.

In January 2006, KBS settled with the National Tax Service on a refund of 50 billion won, though it had a chance of winning a larger amount. The prosecution claimed that Jung dropped the suit in order to make up for losses using the settlement to cover up his poor management. Jung was reappointed to his position in November of that year.

Jung, 63, is supported by the main opposition Democratic Party and liberal civic activists. He was appointed as KBS chief after a long career with the progressive Hankyoreh local daily.

Detractors of the Lee administration has viewed the dismissal of Jung as part of attempts by President Lee to take control of the media by planting one of his aides into the nation's largest broadcaster.
__________________
Jung Yun-joo is a progressive journalist who ran the state-run KBS broadcasting network during the previous government.