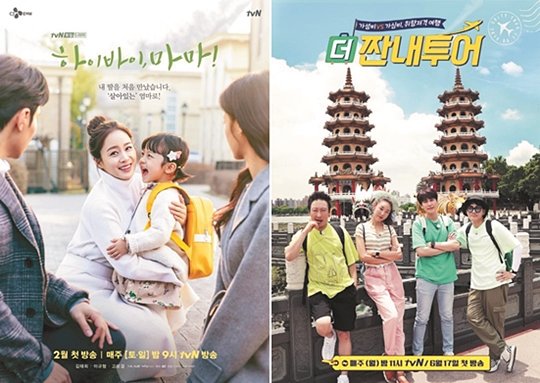 The entertainment industry is suffering due to the COVID-19 spread. Major events have been cancelled or postponed and production in contents such as drama and TV shows is experiencing major setbacks. That doesn't mean broadcasting should come to a stop altogether, so the showbiz is anxious.

Production is vulnerable to the virus, because many people come and go on sets and many shows take place in regional areas. Still, many dramas that are being chased by time are going on with the schedule. A production that's coming out with a drama early this year said, "We had to change all the plans. We postponed all outdoor filming and are filming in the sets. Masks and hand sanitizers are being distributed on the sites and temperature checks are being made, but there are still many difficulties. We are considering editing the scripts, even. If even one person gets sick, the productions, broadcast and actors will be tremendously affected".

In fact, harm is already being done. "Hi Bye, Mama!", which spiked interest as Kim Tae-hee's comeback drama, delivered news that one of the staff members had been put in isolation. Only when results turned out negative did the production resume. A drama that's based in a hospital had to put all work on hold when there was an infected from that hospital. Two staff members who visited Fashion Week in Milano from the 18th to the 24th, have also been confirmed with the virus. This event was visited by many celebrities and fashion related people such as Song Hye-kyo, Han Ye-seul, Park Min-young, IU, Chung-ha, Lisa (Blackpink) and more. There hasn't been an infected within the celebrities, but people inside and outside the entertainment industry are paying close attention to whether they are infected or not.

The same can be said for entertainment shows. Most outdoor variety shows or shows that meet people have seized all recordings. In particular, as the number of overseas travel restrictions on Korean travelers has increased and domestic travel has become more difficult, entertainment programs have taken a direct hit. "Salty Tour" (tvN) is going to broadcast up to the 16th and will decide whether to resume production depending on the trajectory of the virus. "Let's Eat Dinner Together" (jTBC) and "Where Is My Home" (MBC) have stopped filming and "Comedy Big League" (tvN) and "Gag Concert" (KBS 2TV) have been recording their sessions without an audience. The finals of "Mister Trot" (TV Chosun), which has an average viewership of 30%, will proceed without an audience.

Production presentations and press conferences, both major events promoting new programs, are also being replaced by live online broadcasts. This was a 'biting the bullet' decision, considering a large crowd of celebrities, staff, reporters and audience members gather at these events. Netflix's "Kingdom - Season 2" is holding its contents presentation online as well. Sources say, "Online presentations have less popularity and less exposure to media, but we don't have a choice".

Stars are going through a hard time too. Those who have been in popular shows or dramas have interviews with reporters and talk about many things. Recent popular dramas such as SBS's "Stove League", tvN's "Crash Landing on You" and SBS's "Dr. Romantic 2" have turned down interviews due to COVID-19.

"COVID-19 Causes Major Disruptions on TV"
by HanCinema is licensed under a Creative Commons Attribution-Share Alike 3.0 Unported License.
Based on a work from this source