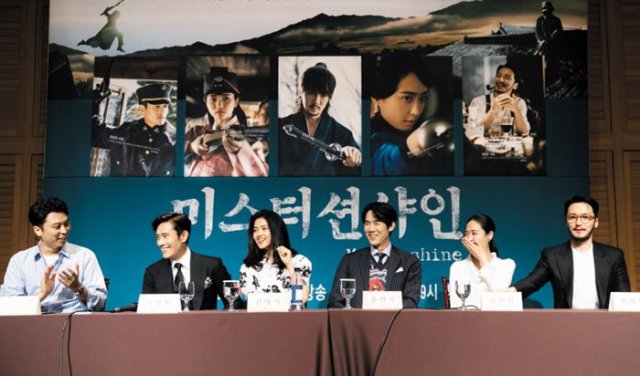 The duo behind the hugely successful "Descendants of the Sun" and "Goblin" on Tuesday talked to hundreds of reporters who packed a press event for the show in Seoul.

"There are many TV dramas and films about Korea under Japanese colonial rule, but not many on the militia who were active just before Korea was annexed by Japan", Lee explained.

The plot starts with the 1871 U.S. expedition to Korea. A son of a slave goes to the U.S., becomes a marine officer and returns to Korea, and the plot unfolds as he meets members of militia in the final days of the Chosun Dynasty.

The producers did not disclose the budget, but industry insiders estimate that the series cost at least W40 billion (US$1=W1,116). Filming took place all across the country, including Busan, Daegu, Gokseong, Gyeongju and Hapcheon. Over 10,000 extras were recruited for a realistic portrayal of the battle scenes.

Korea's first studio solely devoted to the early 1900s setting of Korea was built on a 20,000 sq.m site. "It was hard to recreate buildings in the style of the early 1900s as almost nothing remains. We had to do archival work in the U.S. and museums to be as accurate as possible", Lee said.

Actor Lee Byung-hun (48) plays his first role in a TV series in nine years. "There was no reason why I shouldn't do this when it's a new work by Kim Eun-sook", he said. His paycheck caused some controversy as he reportedly takes home W200 million per episode, and W4.8 billion overall. He is also 20 years older than his partner in the series, Kim Tae-ri.

"We don't feel it is a problem. He has a great sense of humor, and he treats me in a way that makes me feel comfortable", said Kim Tae-ri, who plays the daughter of a prominent family who fights for her country as a member of the clandestine militia.

It will be worth seeing whether Kim Eun-sook will avoid her stereotypical pattern of creating Cinderella-type fairy tales. The writer said last year, "In my next project, I will write about an independent and proactive woman who doesn't depend on a rich man".

"Mr. Sunshine" will also be streamed on Netflix, which paid a reported W30 billion for the rights, and be available in over 190 countries.

"Creators Talk About New Blockbuster Period Drama"
by HanCinema is licensed under a Creative Commons Attribution-Share Alike 3.0 Unported License.
Based on a work from this source