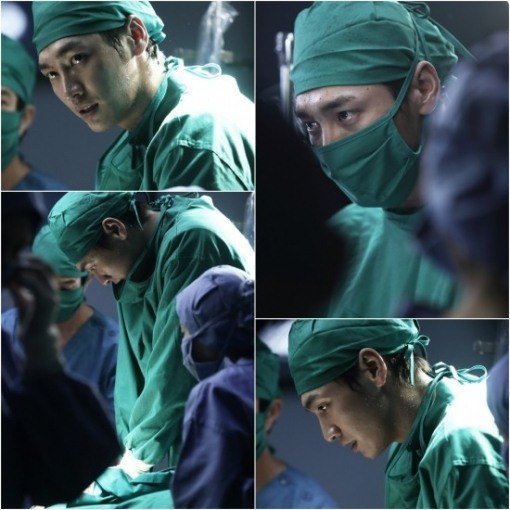 Pictures of Kim Young-kwang performing an intense surgery in the new JTBC drama "D-Day" were released.

Kim Young-kwang in the pictures is focused on a surgery. Sweat trims his surgical hat and shows how intense the scene is. Kim Young-kwang checks the patient's vital signs frequently as he performs surgery. His eyes show that no mistakes are acceptable and has a lot of weigh on his shoulders.

Lee Hae-seong is a doctor who puts human life ahead of anything else. Unlike the hospital which prefers to carry out surgery that makes money, he is more focused on saving emergency patients and conflicts with the hospital. In reality, he would have been hated, but the situation in the drama is based on a great earthquake. Hae-seong does his best to save any patient he can in the chaos.

Kim Young-kwang is apparently doing all he can to express Hae-seong's belief and fierce eyes. To perform the scene of the surgery, it requires high concentration and quick hand movements so Kim Young-kwang made previewed his routine over and over again.

Meanwhile, "D-Day" is a human drama about the medical team DMAT which struggles to save human lives in the situation of a great earthquake in Seoul. The first episode will be released in September.

""D-Day" Kim Young-kwang's intense surgical scene"
by HanCinema is licensed under a Creative Commons Attribution-Share Alike 3.0 Unported License.
Based on a work from this source