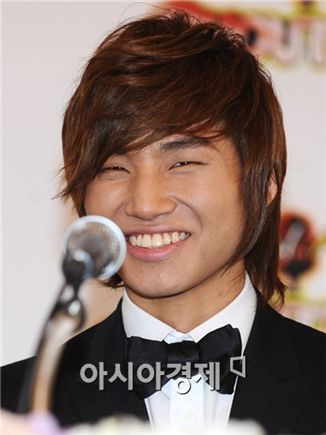 Dae-sung, member of popular boy band Big Bang, will replace T.O.P., the rapper of the same group, to star in a new TV series by famed writer Song Ji-na.

"Dae-sung will take off his acting career starting by making an appearance in 'Zero Plus'", an official at the group's agency YG Entertainment told Asia Economic Daily over the phone on Monday.

T.O.P., whose real name is Choi Seung-hyun, had originally been tapped to play the main character but decided to withdraw from the drama due to a conflict of schedule. He had made his acting debut in 2007 drama "I Am Sam" and last appeared in hit blockbuster drama "IRIS" alongside Lee Byung-hun and Kim Tae-hee.

Dae-sung, 20, was part of the cast for musical "Cats" in 2008 and also released a solo album early this year. He also makes regular appearances on popular weekly variety show "Family Outing".

Song, one of the most successful television writers in Korea, has written numerous hit dramas including "KAIST", "Sandglass" and the recent "The Legend", which starred Hallyu star Bae Yong-joon. "Sandglass", which starred top actress Go Hyun-jung, recorded a 64 percent viewership rating at the time of its airing in 1995, making it one of the highest-rated dramas in Korean history.

"Zero Plus", about the dreams and love stories of students enrolled in the theater department in college, is set to air within the first half of this year.