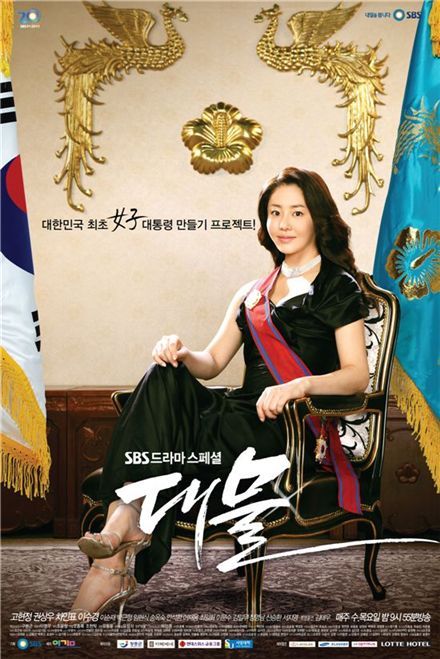 Viewership ratings for all three Wednesdays and Thursdays prime time series declined this week but SBS drama "Daemul - Big Thing" continued to keep its lead for the eighth week straight.

"Daemul - Big Thing" scored an average viewership rating of 24.3 percent, according to data by Total National Multimedia Research (TNmS) and 25.2 percent from statistics by AGB Nielson Media Research on December 3, both seeing about a one percent drop in ratings from last week.

"Daemul - Big Thing" starring Go Hyun-jung, kwon Sang-woo and Cha In-pyo, about one woman's quest to become the first female president of the country, finally signaled the start to the race for presidency.

The ratings for KBS' detective story "The Fugitive Plan B" which came in next, declined even further from last week, collecting average marks of 11.8 percent on surveys by both TNmS and AGB.

The same drama had fetched scores of 14.3 percent and 13.9 percent from TNmS and AGB's polls, respectively, last Wednesday. Its Thursday portion was cancelled due to a basketball match for Guangzhou Asian Games.

"The Fugitive Plan B" starring Rain and Lee Na-young is story about a detective and his female client getting chased by cops and gangs as they get entangled in a case searching for gold that disappeared almost a century ago.

The drama, last Wednesday, scored 6.9 percent on TNmS' survey and 8.6 percent on AGB's poll while its Thursday show was pushed back to this week due to the aforementioned Guangzhou Asiad basketball match.

""Daemul - Big Thing" keeps hold on prime time chart for 8th week "
by HanCinema is licensed under a Creative Commons Attribution-Share Alike 3.0 Unported License.
Based on a work from this source