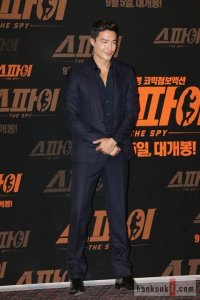 In the category of "most likely to succeed in Hollywood" among Korean actors, Daniel Henney has the advantage. Born to a British father and a Korean-American mother and raised in Michigan, the 29-year-old model-turned-actor has already appeared as Agent Zero in "X-men Origins: Wolverine", which will be released worldwide in the end of April next year.

In an interview on set in Sydney, Henney talked about his excitement about making a Hollywood debut using both Korean and English.

"I was on holiday with my parents in my hometown in Michigan on New Year's Day. At the time, everything was kind of stagnant because of the strike of Hollywood writers. So I was very surprised when the casting director of the 'X-men: Wolverine' called me".

- So did you have an audition?

- Do you plan to split your time between Korea and Hollywood?

"Korea is the country that gave me everything that I now have and enjoy. I think of myself as a Korean actor. Korea made me an actor. My hope is to shoot one movie in Korea and one in the Hollywood every year. Of course that is strictly my personal dream".